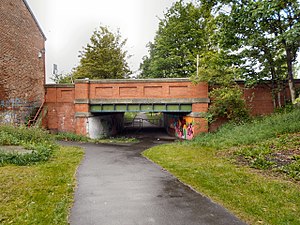 Many of the canal's structures have survived, including this bridge at Abbey Hey Lane

The Stockport Branch Canal was a five-mile branch of the Ashton Canal in Lancashire from Clayton to Stockport.

The canal left the main line of the Ashton Canal at Stockport Junction (otherwise Clayton Junction), between locks 10 and 11 at Clayton, and it terminated at Stockport Basin just beyond the top of Lancashire Hill. It was just less than five miles long and lock-free.

It went through Gorton, Abbey Hey and Reddish and it opened for trade in 1797.[1]

At Reddish, it was intended that a further branch (the Beat Bank Branch Canal) would be built, and work actually began on construction of this branch. Only an isolated section of that branch was ever built, and it never connected with the Stockport Branch.

The canal was for the most part urban, being heavily industrialised along most of its length. Between Clayton and Gorton there was a heavy concentration of engineering factories and ironworks as well as the Canal Company’s Depot at Gorton. Beyond Gorton, all the way through Reddish, cotton mills predominated.

The main line of the Ashton Canal had been authorised by Act of Parliament in June 1792, and in March 1793 the Proprietors obtained a second Act, which authorised a branch to Stockport, a branch which would leave the Stockport branch at Reddish and run along the Tame Valley to Beat Bank to serve some coal mines at Haughton Green, and a separate branch to Hollinwood. The Act authorised the Proprietors to raise an additional £30,000, with which to fund all three branches. Although the Company advertised for an engineer, they did not find one, and their agent James Meadows probably oversaw the construction. The Hollinwood branch was finished first, in late 1796, but the Stockport branch opened soon afterwards, in January 1797.[2]

With good supplies of coal from the mines at Werneth which the Hollinwood branch served, and difficulties in building the Beat Bank branch due to it being on a clay slope, the Company decided to abandon further work on the Beat Bank branch, and notified William Hulton, the owner of the collieries at Denton, that they could not afford to continue. An Act to formally abandon it was sought in 1798, and although opposed by Hulton, it was obtained. In the same year, the Canal Company built warehouses at Stockport, and wharves were allocated there to assist the Werneth Colliery to sell its coal, and thus generate more traffic on the canal.[3]

With the coming of the railways, traffic fell, and dividends had dropped to 6 per cent by 1842. The Manchester, Sheffield and Lincolnshire Railway offered to buy the canal for an annual payment of £12,364, which would give the shareholders a 7 per cent return, and with a further payment of £540 per year to fund interest payments on debts, the Canal Company accepted gratefully in 1846. The takeover was formalised by an Act of Parliament in 1848, which required the Railway Company to maintain the canal in good order.[4] This they did for many years, running their own boats for the carriage of goods until 1892. The Canal Company was wound up in 1883, and the shareholders were given shares in the Railway Company.[5]

The canal was principally used to carry general cargo, such as supplying raw cotton to the mills and returning with manufactured goods. It also carried coal for the mills and the townsfolk who lived in the neighbourhood. Another important cargo was the supply of grain to William Nelstrop & Company’s Albion Corn Mill at Stockport Basin.

In its early days there was passenger carrying on the Ashton Canal and one of the routes was between Manchester and Stockport.

The canal began to decline as a result of competition from railways and roads, and was described as derelict as early as 1922.[1]

Commercial carrying ceased in the 1930s but it lingered on into the 1950s as a barely navigable waterway. At one stage in the 1950s it was dredged but this improvement did not attract any traffic. Stockport Basin was the first section to be filled in but it was not until 1962 that the canal was officially abandoned by the British Transport Commission,[6] who had been responsible for it since 1948. It took many years to fill in and this was a disagreeable procedure for people living along its length.

Much of the line of the former canal remains intact and there are now plans to re-open it as an amenity canal;[7][8] these plans have the support of local authorities. Scott states that a British Waterways report indicates that reopening the canal is technically feasible.[9]