Poynton is a modest town in Cheshire, at the easternmost fringe of the Cheshire Plain, 7 miles north of Macclesfield, 5 miles south of Stockport and 11 miles south-southeast of Manchester. At the time of the 2001 census, Poynton-with-Worth had a population of 14,433.

From the late Middle Ages coal has been mined in Poynton. The collieries, under the ownership of the Lords Vernon, from 1832 until their closure in 1935 they were the largest in Cheshire. Consequent urbanisation and socioeconomic development necessitated better transport links; these came with the completion of the Macclesfield Canal through Poynton in 1831 and the arrival of the Manchester and Birmingham Railway in 1845 and the Macclesfield, Bollington and Marple Railway in 1869. By the late 20th century, Poynton had emerged as a commuter town, partly because of the transport links and because it forms part of the Greater Manchester Urban Area.

Nearby is the village of Higher Poynton, a small and beautiful rural place away from the townscape with farmland and forest. Here are the countryside walks across Higher Poynton leading to Lyme Park and around the area and much frequentd by the energetic of the Poyton folk.

The first mention of the manor of Poynton is in 1289 when it was part of the barony of Stockport. Past spellings include Ponynton and Poynington[1]

The Warren family held the manor from before 1386 when Edward de Warren married Cicely de Eton of Poynton and Stockport until 1801 when Sir George Warren, the last surviving male, died. He was succeeded by his daughter, Lady Warren Bulkeley. She died childless in 1826 when she left the estate to Frances Maria Warren,[2] Lady Vernon.[1] The Lords Vernon held the estate until the final sale in 1920.

Coal is found outcropping to the east of Towers Road, which corresponds to the line of the Red Rock Fault; that is at the surface. It has been worked from early times. The earliest record to be found is a lease dated 28 February 1589, which talks of the "Coal pit at Wourthe lately occupied by George Finche". This could be worked on the surface then by bell pits, and then by deeper shafts with waterwheels or steam engines operating pumps and winding gear. Around 1700, the Warrens of Poynton co-operated with the Leghs of Lyme to work the Cannel and Sheepwash seams at Norbury Hollow.[3] Initially, the mines were pumped using waterwheels driven by the Norbury Brook; atmospheric steam engines were then used and then Watt condensing engines thus allowing deeper pits to be sunk. Output in 1789 was over 26,000 tons rising to a peak production of 243,673 tons in 1859.[4] The Poynton Colleries were substantial, and the coal rights were held by the Warren family who leased them the Wrights and the Claytons. The canal and new roads and railway lines were used to remove the coal, In 1826 the estate passed to George John Venables Vernon, 4th Lord Vernon who decided in 1832 to manage the mines himself.[3]

In 1856 it was estimated that there was a reserve of 15,000,000 tons of coal which would supply 245,000 tons for 61 years. This was to be supplied by the Park Round Pit, and the Park Oval Pit both working the Four Foot and Five Foot Seam and the Anson Pit and the Nelson Pit which were working the Accommodation Seam.[5] The pits had good transport links to their principal markets, Cotton Mills of the Manchester conurbation. With the Lancashire Cotton Famine, 1861 and the subsequent recession, the price of coal collapsed, the vend dropped 112,840 tons. Men were laid off. A new shaft, the Lawrance Pit was sunk at Park, in 1885 raising the vend to vend of 216,362 tons and paying for itself within a year.[6] However the costs were rising and the closure of the Norbury Pits resulted in a constant ingress of water. In 1926 production was down to 80,000 tons and this was the year of the general strike.

The 1926 General strike lasted for 17 weeks in Poynton and the men went back to work as the collieries would have closed due to the cost of pumping. The collieries closed on 30 August 1935; 250 men were made redundant. 80 men were offered jobs in Kent, and some secured employment with AVRO at Woodford, Cheshire.[7] The Anson Colliery is now the site of the Anson Engine Museum, all other shafts have been capped and Park Pit has been levelled. 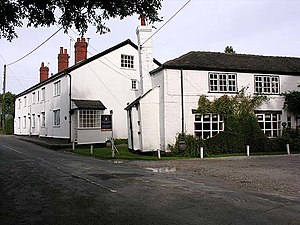 The Macclesfield Canal was originally proposed in 1765, but construction was not commenced until 1826 due to opposition from outside parties. Thomas Telford was the designer and the canal was completed in 1831. The original coal wharf at Higher Poynton is now in use for boatfitting.

Sir George Warren was a promoter of the extension of the turnpike road from Manchester by way of Hazel Grove to Sandon in Staffordshire. The Manchester and Birmingham Railway Railway opened line through Poynton in 1845 which today forms part of the London–Manchester main line. The Macclesfield, Bollington and Marple railway was opened in 1869, with stations at Higher Poynton and Middlewood, and was closed in 1970. The line is now footpath called the Middlewood Way.

A view of the Manchester conurbation from Poynton

During the late 18th century, the Pickford family developed their family business of waggoners on the London-to-Manchester route with The Birches Farm at Poynton as its headquarters. The business thrived and they relocated to London in 1823. Pickfords is today one of the best known removal firms in the United Kingdom.

From the 1870s private house-building gathered pace and gradually Poynton became a commuter town for those working in the Manchester conurbation. Since the Second World War several housing estates have been built by both the local authorities and private developers. 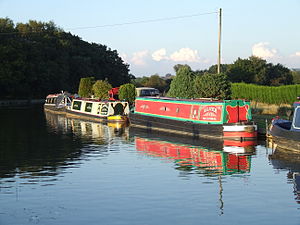 The Macclesfield Canal, a canal with only one flight of locks, was originally proposed in 1765 but not begun until 1826. Completed in 1831, it joins the Peak Forest Canal in Marple with the Trent and Mersey Canal near Kidsgrove and forms a part of the Cheshire Ring. The route was chosen so it could pass close to the Poynton Colleries, in order to transport coal to Macclesfield for the steam engines and 5,000 houses. It shortened the canal journey from Manchester to London by 25 miles and allowed easy carriage of coal to the cotton mills at Dukinfield.[8]

Poynton lies to the south of the old route which is now the A6, which ancient way was the favoured road between London and Manchester in the Middle Ages as it avoided the wetter land of the Cheshire Plain. The road was improved by the formation of a turnpike trust in 1724. In 1760, Sir George Warren, the Leghs of Adlington and James Pickford promoted a new turnpike road through Poynton with Worth from Hazel Grove to Sandon in Staffordshire which provided a link to Macclesfield. It is now known as the A523, or locally as the London Road. Later the Chester Road, the A5149 provided a link to Wilmslow.[9]

The Manchester and Birmingham Railway opened a line through Poynton in 1845 which today forms part of the West Coast Main Line between London and Manchester. The station on this line, offers local services to Manchester and Macclesfield.

The old Macclesfield, Bollington and Marple Railway opened in 1869 was closed in 1970 and the line has been converted into a footpath and bridleway called the "Middlewood Way".

Both have active congregations: running services, youth groups and a children's group. 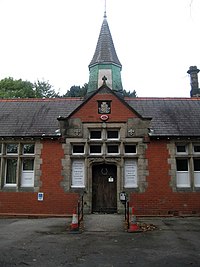 Poynton Co-op was founded in 1862, staying independent until February 1992. There were many Friendly Societies, Burial Clubs, Workmen's Club[10] and the Miners' Union. The Methodist Chapel was established in 1847 followed by the Baptists and Primitive Methodists chapels; together with St George's Church they were the social centres of the village. Lord Vernon opened the first school in 1838 which was extended as the number of children attending it grew, and this building is used today as the Poynton Youth and Community Centre.

Today the churches are still busy community-builders. A number of other community activities continue, if not quite as once they were in the Victorian height.

The Poynton Show,[11] is held every August Bank Holiday weekend. It started in 1885, as an agricultural show, and has grown in size, 35,000 people visited the show in 1970. It offers a full range of events in the main arena such as stunt riding and aerobatics, a fairground, exhibitions and competitive events.

The St George's Singers, is large choral society founded in 1956. The choir has strong links with the Royal Northern College of Music and Chetham's School of Music. It has sung abroad, in such exotic foreign towns as Helsinki, Tallinn, Krakov, Budapest and Érd. More locally the choir's Singing Day attracts over 200 singers to learn and perform choral music.[12]

The Vernon Building Society (Poynton) Brass Band[13] is one of the region's premiere brass bands. It was founded within the Poynton coal mining community and was supported by the mine owners, the Vernon family. It is not known for certain when the band began, but records from 1832 stating that new uniforms had been purchased by Lady Vernon suggest that it has existed for well over 160 years. Delighting audiences throughout the year with original and entertaining concert programmes, the band is also a regular prize-winner at contests throughout the country.

Sir George Warren bought the Worth estate in 1792. Worth Hall, originally the home of the Downes family of Worth, has now been redeveloped as flats and lies within the confines of Davenport Golf Club.

Several halls were built in Poynton Park, each one then demolished to make way for a new hall. The last hall, Poynton Towers, was finally taken down in the 1930s. The ornamental lake, known locally as Poynton Pool, was created in the 1760s by Sir George Warren who dammed a tributary of the Poynton Brook, as part of his landscaping of the Park. The dam itself served as the foundation for the turnpike.[9]