Loch Lomond and the Trossachs

From Wikishire
(Redirected from Loch Lomond and the Trossachs National Park)
Jump to: navigation, search 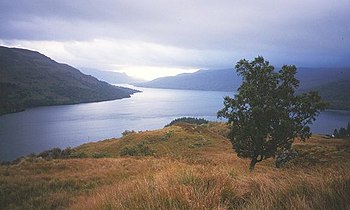 Loch Lomond and The Trossachs National Park is at the edge of the Highlands, across the borders of Argyllshire, Dunbartonshire and Perthshire. It is centred on Loch Lomond, which divides Dunbartonshire to the west from Stirlingshire to the east, and includes several ranges of hills. Within the hills to the east of the loch are the Trossachs, a famous glen, and the hills surrounding it loosely known as the Trossachs area.

The park is the fourth largest in the British Isles, with a total area of 720 square miles and a boundary of some 220 miles in length. It includes 21 Munros (including Ben Lomond, Ben Lui, Beinn Challuim and Ben More, and both of the munros called 'Ben Vorlich': Ben Vorlich, Perthshire and Ben Vorlich, Dunbartonshire. Nineteen of the lesser hills are 'Corbetts'. The national park contains two forest parks (Queen Elizabeth, and Argyll) and 57 designated special nature conservation sites. The park is customarily split into four sections: Breadalbane, Loch Lomond, The Trossachs, and Argyll Forest Park.

The park consists of many mountains and lochs, and the principal attractions are scenery, walking, and wildlife.

For walkers seeking a challenge, the West Highland Way passes through the park, while the mountains of Ben Lomond, and The Cobbler in the Arrochar Alps attract most hikers. Less intrepid visitors can detour from the A82 to view the Falls of Dochart.

There is a national park visitor centre at the southern end of Loch Lomond, called Loch Lomond Shores, which includes a visitor information centre at the most popular gateway to the park, as well as an aquarium, shops and restaurants.

On Loch Katrine, visitors can travel on the historic steamship SS Sir Walter Scott, while cruises on Loch Lomond can be taken from Tarbet, Argyll and Bute and Balloch; there is also an extensive water taxi service between most lochside communities.

Towns and villages within the park

Towns and villages within the park include:

Munros within the Park

The munros, which is to say mountains over 3000 feet within the park are:

There are 21 munros in the National Park and 16 of them are within Breadalbane. Ben Lomond remains the most popular munro of them all to be climbed.