Linton is an affluent village a mile and a half southwest of Wetherby, in the West Riding of Yorkshire. It belongs to the parish of Collingham.

The village is to be found between Wetherby and Sicklinghall, on the River Wharfe; Linton is on the north bank of the river and Collingham on the opposite bank, the two joinedby a bridge.

Though separate from Wetherby, surrounded by countryside, the cottages of Linton stretch down the road to its neighbour and meet those reaching up from Wetherby.

The name "Linton" is from the Old English lin tun, meaning "flax farm".

Another 'Linton' is to be found higher up the River Wharfe, in the Craven area of Yorkshire.

Crop marks around the village point to ditched enclosures and field systems in the Iron Age and Roman period (800 BC – AD 410). Roman artifacts have also been found, and in 1936, a Roman burial site was identified to the north of the village.

The village is mentioned in the Domesday Book, where it is valued higher than Wetherby. There was a now-vanished mediæval chapel in the village, possibly founded by the Percy family, who once owned the village.[1]

"a township, in the parish of Spofforth, Upper division of the wapentake of Claro, W. riding of York, 1¾ mile (W. by S.) from Wetherby; containing 169 inhabitants. The township comprises by computation 1030 acres. The village is situated on the north side of the vale of the Wharfe. A rent-charge of £257. 10. has been awarded as a commutation for the tithes. There is a place of worship for Wesleyans."[2]

A correspondent writing in the Leeds Mercury on 8 September 1874 notes:

"On the opposite side of the Wharfe [from Collingham], perched on the hillside, is the picturesque village of Linton, the most conspicuous object being a neat Wesleyan chapel."[3]

The golf course on Linton Ings was opened in 1910. The architect William Alban Jones was responsible for several new houses built in the Arts and Crafts Movement style around the old hub of the village in the 1920s, and also for the small Memorial Hall (1947).[4] 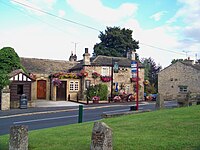 The village has one pub - the Windmill Inn on Main Street, which has a restaurant.[5] There is no shop or school. Wetherby golf club is situated in Linton. The historic Wood Hall Hotel and Spa is on the outskirts of the village; this has function rooms and health club facilities.[6] There is a guest house called Linton Close overlooking Linton Ings. The Memorial Hall has a car park and tennis courts.

The village no longer has a place of worship. It forms part of the ecclesiastical parish of Wetherby with Linton, served by St James's Church in Wetherby.[7]