Croston is a village and parish in Lancashire, between Chorley and Southport, next to the River Yarrow. St Michael's and All Angels' Church is at the centre of the village. The population of the civil parish at the 2011 census was 2,917.[1] At the end of Church Street there is a stone cross which was erected in 1953. There is a 15th century cobbled pack-horse bridge which crosses the River Yarrow. The village green is used as a venue for the annual May Day Madness, Bastille Day (14 July) celebrations and Christmas Fair.

Croston began in the 7th century when St Aidan arrived at the riverside settlements. In the absence of a church, a cross was erected as a place of worship. Croston literally means 'cross-town' and is derived from the two Old English words 'cross' and 'tūn' (town/homestead/village). The name is unique as there are no other Crostons in the UK.

The ancient parish of Croston used to be far larger than today, incorporating Chorley, Much Hoole, Rufford, Bretherton, Mawdesley, Tarleton, Hesketh Bank, Bispham, Walmer Bridge and Ulnes Walton. These became independent parishes as a result of a series of separations between 1642 and 1821.[2] A charter granted by Edward I in 1283 permitted an annual mediæval fair and market to be held on the village green. Pre-20th-century maps also depict a castle which is believed to have been of a wooden construction because there is no evidence of a stone structure.[3]

Croston Hall was built by the De Trafford family and was the manor house to the village of Croston. The hall was demolished in the 1960s, but there is a plan for a country-house hotel to be built on its site. The family were Roman Catholics, and employed Edward Welby Pugin to design a family chapel in the grounds of the house in 1857. It is a small building constructed of rock-faced sandstone, and is in eclectic Gothic style.[4] It was left to the people of Croston on the death of the last De Trafford in the 1960s.

The parish church is dedicated to St Michael, and is a Grade-II* listed building.[5] It appears to be based on a 15th century design, but was reworked in the 16th century, and altered in the 17th. A partial rebuilding took place in the 18th century, and it was substantially altered in the 19th century. It consists of a nave and chancel with north and south aisles, mostly built of red sandstone with stone tiles.[6] 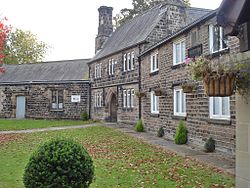 Croston Old School is a Grade-II listed building which originates from 1660, but was substantially rebuilt in 1827, when the work was funded by subscriptions. Date stones commemorating both the original build and the rebuild are evident in the first floor wall. It is located within the churchyard,[7] in the centre of the village at the end of Church Street and next to the church building. Until 1999 the buildings were used as a school. Croston Old School Community Trust's grant from the National Lottery for £481,062 has funded the majority of a scheme to create a community resource centre for Croston.