Standish is a town in Lancashire, on the A49 road between the towns of Chorley and Wigan, a short distance from Junction 27 of the M6 motorway. It is to the north of Wigan, on the low ground between the two rivers which join in that town, the Yarrow to the east and the Douglas to the west, with the Bradley Brook

Standish is on a ridge of high land between these rivers, which rises to 370 feet and runs north to south across the township. The underlying rocks are the coal measures of the Lancashire Coalfield.[1][2]

Standish railway station was on the West Coast Main Line, but it closed in May 1949. Victoria Colliery has closed and has become a housing estate. The Church of St Wilfrid is a Grade I listed parish church, lying within the locality. 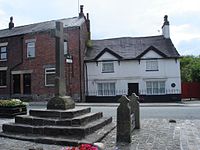 In the Market Place in front of the parish church is a late mediæval cross, and also stone stocks and a 14th-century well, latterly used for washing. 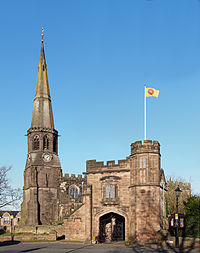 St Wilfrid's Church is the only Grade I listed building in the village. It is a mixture of ages: the main body of the church was built during the reign of Queen Elizabeth I, on the site of a mediæval predecessor. It was built though onto an older tower, possibly of the 14th century. The spire on top of the tower is more recent: the original spire was damaged by lightning in 1814 and blown down in a storm eight years later. It was rebuilt soon after, but then the tower and spire were rebuilt in 1867.

The church internally has a beautiful oak timbered ceiling, crafted in typical medieval style has been described as one of the finest examples in the land.

A Roman road passed through Standish.[2]

Standish and Langtree were part of the Penwortham barony in the 12th century and between 1150 and 1164, Richard Bussel, Lord of Penwortham gave them to his brother-in-law Richard Spileman. In 1212 Thurstan Banastre held them and later they were held by William de Ferrers Earl of Derby, and then by 'the lords of Leylandshire'. The tenants adopted the local surnames, Standish and Langtree.[1]

In 1896 the Wigan Coal and Iron Company owned the Broomfield, Giant's Hall, Gidlow, John, Langtree, Robin Hill, Swire and Taylor Pits. The largest of these was the Langtree Pit with over 540 employees.[4]