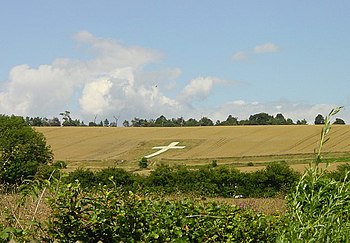 Lenham Cross is a figure carved as a war memorial into the chalk hillside of a ridge of the North Downs to the north of the village of Lenham in Kent, to the south-east of Maidstone.

The North Downs Way and the Pilgrims' Way share a path which runs along the slope by the memorial.

The cross was constructed as a permanent testament to the sacrifice of those from the parish who died during the First World War. It was designed by Mr C H Groom the headmaster of the village school and dug out by local volunteers. It was unveiled in September 1922 by Major-General Sir Arthur Lynden-Bell.[1]

The memorial originally included an inscribed memorial stone within a separate fenced enclosure at the south end of the cross, but this has since been moved to the parish church.