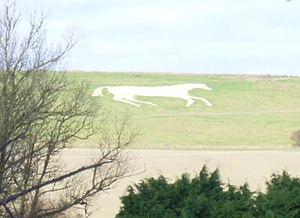 The Devizes White Horse, officially known as the Devizes Millennium White Horse, is a chalk hill figure of a horse located on Bank Field, an escarpment at Roundway Hill, on the outskirts of the town of Devizes in Wiltshire, above the hamlet of Roundway.

The horse is a modern hill figure, cut in 1999 to celebrate the forthcoming third millennium, and is based on a design of another white horse hill figure, now lost to view, which was also known as the Devizes White Horse, or sometimes The Snobs Horse. The Snobs Horse was very close to the present horse as it was also on Roundway Hill beneath the Oliver's Castle hill fort: traces of it can still be seen under the right conditions. 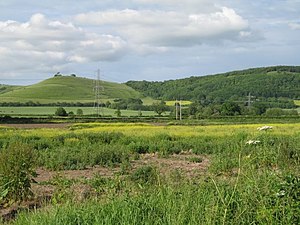 Roundway Hill, the west side of which (pictured) was the location to the original Devizes White Horse

In 1845, local shoemakers cut a white horse into the west side of Roundway Hill, directly beneath the hill fort, Oliver's Castle. This was a good location for a hill figure, as it overlooked the valley on a steep slope about 600' above sea level, and could be seen from many miles away.[1][2] It was known locally as the "Snobs Horse", the word "snobs" derived from the local word for shoemaker. By the date it was cut, in 1845, there were already several white horse hill figures visible in 1845 in Wiltshire at Westbury, Alton Barnes, Hackpen, Cherhill, near Inkpen, Marlborough and possibly at Broad Town, whose horse has an unknown origin but probably from the 19th century. Another horse, at Rockley, was 'discovered' in 1945 beneath the grass. Most of them still exist today, the exceptions being those at Inkpen and Rockley. The Devizes horse was neglected and was lost in about 1922, and no dimensions of the horse seem to have ever existed.[2] However, different colouration of the grass could be seen.

In 1954, James Smith, the head boy of the Devizes Grammar School of the time, was out cycling and believed he saw the outline of a horse on the Oliver Cromwell promontory. His observations were checked and indeed there was the faint outline of the head, neck and rump of a horse to be seen. This was the old Snobs Horse.[2] A sketch of the design of the horse was drawn and was later used for the design of the modern 1999 Devizes Millennium White Horse, except reversed, as the Millennium White Horse faces the right (the only white horse in Wiltshire to do so), whilst the Snobs Horse sketch faced left. Attempts to remake the figure at this point in 1954 were unsuccessful, as were previous attempts in 1909, 1939 when the horse was also reported to be seen,[2] 1977, 1987 and finally 1998 when its head and neck reappeared.

In 1979, freak lighting conditions and fine snow brought the outline of the horse's neck and head into view for the first time since 1954.[2] The head and neck have been seen regularly since, including in 1998, 2000 and 2005, the latter two times were since the creation of the Millennium White Horse. Whenever any part of it has reappeared it seems to suggest the horse was small, and roughly half the size of the Millennium White Horse. The reason for its regular reappearances is due to its method of construction, trenching, which is by far the most common method of hill figure construction. The underlying chalk was not near the surface so a trench was dug and chalk from another site was used to fill the trench. The reason this method of construction has led to the Snobs Horse occasionally revealing itself, is because trenching is invasive in the hillside and allows traces of the figure to be seen even when the figure has been overgrown for many years.[3] 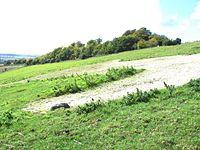 The nose of the horse, revealing the rock used for its nostril

In 1998, a newcomer to Devizes, Sarah Padwick, who was presumably inspired by the other seven current white horses in Wiltshire, sent a letter to a local newspaper that there should be a white horse cut on Roundway Hill to celebrate the millennium. She was unaware of the very nearby Snobs Horse.[2][4] The newspaper liked the idea and plans followed suit. Originally, the plan was to recut the Snobs Horse in its original location (the aforementioned 1998 attempt). This plan was unsuccessful due to the site being declared a Site of Special Scientific Interest.[5] However a local farmer, Chris Combe, offered his part of land on Roundway Hill as an alternative site, provided permission were granted by the Crown Estates Commissioners, who own the land, and after taxpayers' money was offered and the local council granted planning permission,[5] work began. The design was of a horse at a trot, in contrast to other Wiltshire white horses, which are depicted standing.

A committee was set up to oversee the project, the 'Cavaliers of the Devizes Millennium White Horse', and members of the public were invited to join. The group was also formed to support its future maintenance. Alan Truscott, of Sarsens Housing, joined the committee as the member in charge of the surveying and pegging out of the figure of the horse on the hill, alongside did Keith Saunders of Pearce Civil Engineering, who joined to provide the machinery and manpower to complete the clearing of the top soil and the infilling of the chalk following the cutting of the outline, the cutting of which was done by hand by various groups and individuals from the local community. 200 people helped cut the figure.[5]

The digging of the outline of the horse occurred over the weekend of 18/19 September 1999. The 200 people cutting were asked to dig one metre in length.,[6] the total length of the horse being about 760 feet. Later Pearce Civil Engineering dug the body of the horse out and positioned the rocks used as the horse's eye and nostril. The new horse was complete on 29 September 1999.

Devizes White Horse has occasionally fallen into states of disrepair, with the main threat to the site being the growth of weeds.[7] A Beckhampton local, comparing the state of the Devizes horse in 2007 to the then-recently cleaned Westbury White Horse, was quoted by the Gazette and Herald as saying: "What a shame that the civic pride which led to this White Horse being created to celebrate the Millennium does not seem to have lasted longer than the first couple of years of that Millennium."[7] Subsequently, the first major clean-up, or scouring of the horse occurred over a two-day period in April 2007, in which Padwick invited volunteers to join forces and remove weeds, grasses and moss from the horse.[7]

By September 2008, the horse had again become barely visible.[8] The Devizes Millennium White Horse Committee began seeking funds to scour the horse. These scouring plans were then passed to the Probation Service Community Service Group who subsequently thoroughly cleaned the horse, a task they have been since repeated regularly.[8] In August 2014, a writer for the Wiltshire Times complained about the then-current condition of the horse, bemoaning the badly overgrown chalk surface and how the horse appeared "grey and blotchy from a distance. Usually, in the dry of summer, the chalk looks lovely and white," as well as noting how "the gravel pathway leading to the mobility gate [was] so overgrown that no wheel or pushchair could go through to the seat in the field." The writer hoped Roundway Parish Council "would consider some urgent maintenance."[9]