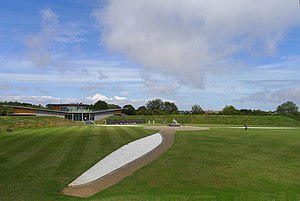 The Battle of Britain Memorial 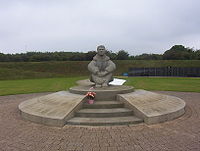 The memorial was initiated by the Battle of Britain Memorial Trust, and opened by Queen Elizabeth the Queen Mother on 9 July 1993. It is formed of a large propeller-shaped base carved into the ground, with the figure of a seated pilot (sculpted by Harry Gray) sitting at the centre. The propeller shape has led the monument to be considered a hill figure.

Also on the site are replicas of a Hawker Hurricane and Supermarine Spitfire and the Christopher Foxley-Norris Memorial Wall, on which appears the names of the almost 3,000 fighter aircrew who flew in the Battle.

In October 2010, The Duchess of Cornwall unveiled a bust of Air Chief Marshal Sir Keith Park by sculptor Will Davies at the site.

The new visitor centre, called The Wing and built in the shape of a Spitfire wing, was opened in 2015, and contains 'The Scramble Experience'.