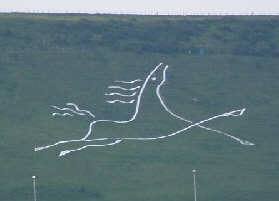 The Folkestone White Horse is a white horse hill figure, carved into Cheriton Hill in the North Downs, near Folkestone in Kent. It was completed in June 2003.[1]

The horse figure overlooks the British terminal of the Channel Tunnel and was planned as a Millennium Landmark[2] to help regenerate the Folkestone area.[3] The design for the horse was drawn by a local artist, Charlie Newington, inspired by a nearby Iron Age fort in an area known as Horse Hill dating from three millennia ago[1]

Planning permission for the project was first applied for in April 1998, with an illustrative canvas mockup erected in August 1999, but the project was opposed by English Nature due to the site's importance as a Site of Special Scientific Interest.[2][4]

Construction of the horse began in September 2002. The work to build the horse was completed entirely by hand. Directed from afar by the artist via radio, a team of volunteers staked out a second canvas template of the horse, and following this, shallow trenches were then dug into the topsoil, 12–24 inches wide. These trenches were then filled with limestone slabs. The entire figure is approximately 300 feet long, measured from the front to the rear hoof.

The Green Party and Friends of the Earth appealed to the European Union to stop the project based on the site's protection under the European Habitats Directive.[2][5] The European Commission issued a formal notice in May 2003 declaring the work illegal and demanding restoration of the site, by which time however the turf for the horse had already been cut and transplanted.[6]

Nevertheless, over two weeks in May 2003 a team of volunteers including locally based Gurkha soldiers[1] transported, cut and positioned limestone slabs in the trenches, fixing them in place with pins. The limestone laying phase of the construction was completed in early June 2003, with the formal notice from the EU outstanding.[1]

In June 2004 "The Friends of the Folkestone White Horse" was formed, to promote the landmark and look after the site, which requires periodic light weeding. A time capsule was buried on the site on 18 June 2004.