The Wye Crown is carved into the chalk hillside of Wye Down, east of the village of Wye in Kent. The figure is 180 feet tall.

The crown was carved in the chalk in 1902 to commemorate the coronation of Edward VII, the work carried out by students from Wye Agricultural College working under the guidance of the Vice Principal T.J. Young: Young had copied a drawing of a crown from a two-shilling coin. On the night of the coronation the crown was illuminated by 1500 fairy lamps, a feat repeated in 1935 for the silver jubilee of Edward’s son King George V.

During the Second World War, the Wye Crown was covered up by having heaps of brushwood piled over it to prevent German bombers using it as an identifiable location marker. 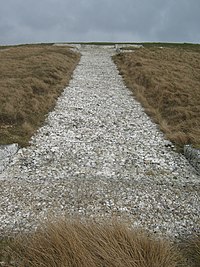 Detail of the Crown