It is a Grade II listed structure.[1]

The bridge was designed by W. R. Galbraith and built by Brassey & Ogilvie for the London and South Western Railway. The bridge is part of an extension to the latter company's railway line from Acton Junction to Richmond. The bridge was opened in 1869.[1] It consists of five wrought iron lattice girder spans of 115 feet each. The cast iron piers are decorated in three stages.

During the Second World War a pillbox was built to guard it on the south end, along with an open enclosure to fire an anti-tank gun from. 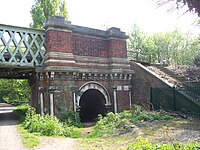 The bridge carries two tracks which are electrified with both third rail and London Underground-style fourth rail. It is now owned by Network Rail and used by London Overground for North London Line passenger trains running between Richmond and Stratford. The same tracks are also used by London Underground's District line trains running between Richmond and Upminster.

In The Dalek Invasion of Earth, a 1964 serial from the BBC's Doctor Who, the TARDIS materialises under Kew Railway Bridge, where it is subsequently trapped when the bridge collapses.[2] A District Line service can also be seen crossing the bridge in the 1965 drama Four in the Morning.