Barnes Bridge is a truss-arch railway bridge across the River Thames between Barnes in Surrey on the southern bank and Chiswick in Middlesex on the northern bank. It makes its northern landfall in the Duke’s Meadows, beside the boathouses.

The bridge today is a Grade II listed structure.[1][2] It crosses the Thames in the midst of a series of wide meanders, in a northwest to southeast direction, carrying a section of the Hounslow Loop Line between Barnes Bridge Station (in Barnes) and Chiswick Station in Chiswick.

The bridge can also be crossed on foot, and is one of only three bridges on the tidal Thames to combine pedestrian and rail use, the others being Fulham Railway Bridge and the Hungerford Bridge.

The original bridge at this location was built in 1849 to a design by Joseph Locke[1] and looked very similar to the original Richmond Railway Bridge which he also designed.

The replacement bridge, designed by Edward Andrews, is three spans of wrought iron bow string girders carrying two railway tracks. The construction work was carried out by Head Wrightson on behalf of the London & South Western Railway and was completed in 1895.[3] The original Locke span still stands unused on the upstream side.

The bridge was given protection as a Grade II listed structure in 1983. 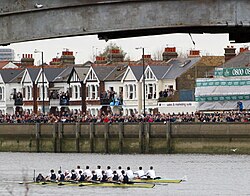 Boat Race approaching Barnes Bridge, from the Middlesex bank, in 2003

Barnes Bridge is also a landmark often quoted for the Oxford and Cambridge Boat Race, because it is suggested that whichever crew is ahead at this point will win the race. In 2003 the crews were in almost equal position approaching the bridge and Oxford ultimately won the race by just one foot.