Chiswick Bridge is a reinforced concrete deck arch bridge over the River Thames between Chiswick on the north bank in Middlesex and Mortlake in Surrey on the south bank. It is one of three bridges which were opened in 1933 as part of an ambitious scheme to relieve traffic congestion west of London, and today it carries the busy A316 road across the river.

The bridge was built on the site of a former ferry. It is 606 feet long and faced with 3,400 tons of Portland stone. At the time of its opening its 150-foot central span was the longest concrete span over the Thames.

The bridge is possibly best known today for its proximity to the end of The Championship Course, the stretch of the Thames used for the Oxford v Cambridge Boat Race and other rowing races.

The villages of Chiswick and Mortlake, about six miles west of central London on the north and south banks of the River Thames, had been linked by a ferry since at least the 17th century. Both areas were sparsely populated, so there was little demand for a fixed river crossing at that point.[1]

With the arrival of railways and the London Underground in the 19th century commuting to London became practical and affordable, and the populations of Chiswick and Mortlake grew rapidly. In 1909 the Great Chertsey Road scheme was proposed, which envisaged building a major new road from Hammersmith, then on the outskirts of London, to Chertsey, 18 miles west of central London, bypassing Kingston upon Thames and Richmond.[1] However, the scheme was abandoned due to costs and arguments between various interested parties over the exact route the road should take.[1][2]

After the First World War, the population of the west London suburbs continued to grow, thanks to improved rail transport links and the growth in ownership of automobiles. In 1925, the Ministry of Transport convened a conference between the councils of Surrey and Middlesex with the aim of reaching a solution to the congestion problem, and the Great Chertsey Road scheme was revived.[3] In 1927, the Royal Commission on Cross-River Traffic approved the scheme to relieve the by then chronic traffic congestion on the existing, mostly narrow, streets in the area, and on the narrow bridges at Richmond Bridge, Kew and Hammersmith.[4] The Ministry of Transport agreed to pay heavy subsidies towards the cost.[1]

A new arterial road, now the A316 road, was given Royal Assent on 3 August 1928, and construction began in 1930.[1] The construction of the road required two new bridges to be built, at Twickenham and Chiswick.[4] The proposal was authorised in 1928 and construction began in the same year.[3] The bridge, along with the newly built Twickenham Bridge and the rebuilt Hampton Court Bridge, was opened by Edward, Prince of Wales on 3 July 1933,[4] and the ferry service was permanently closed.[1] 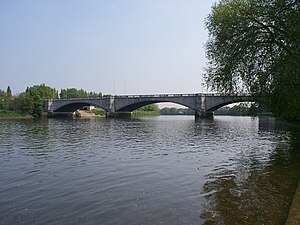 The bridge has concrete foundations supporting a five-arch cellular reinforced concrete superstructure.[4] The deck is supported by a concealed lattice of columns and beams rising from the arched superstructure.[3] The structure is faced with 3,400 tons of Portland stone, except for underneath the arches.[4][5] The bridge is 606 ft long, and carries two 15-ft-wide walkways, and a 40-ft-wide road.[4] At the time it was built, the 150 ft central span was the longest concrete span over the Thames.[5]

Unusually for a Thames bridge, only three of Chiswick Bridge's five spans cross the river; the shorter spans at each end of the bridge cross the former towpaths.[6] To allow sufficient clearance for shipping without steep inclines, the approach roads to the bridge are elevated from some distance back from the river.[7]

The bridge was built at a cost of £208,284, shared between the Ministry and the two councils. 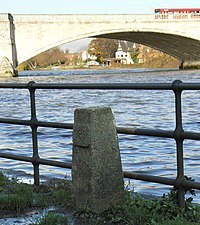 The bridge was generally well received. Country Life praised the design as "reflecting in its general design the eighteenth century Palladian tradition of Lord Burlington's famous villa at Chiswick".[8]

Chiswick Bridge is a major transport route, and the eighth busiest of the metropolitan conurbation's twenty Thames road bridges.

The bridge is possibly best known beyond its neighbourhood for its proximity to the finishing line of The Championship Course, the stretch of the Thames used for the Oxford v Cambridge University Boat Race and other rowing events.[5] A University Boat Race Stone on the south bank, and a brightly painted blue and black marker post near the north bank of the river, 370 feet downstream of the bridge, mark the end of the course.[6]

The towpath under the bridge on the southern bank now forms part of the Thames Path.[6] As at 2009 the northernmost arch was used by the Tideway Scullers sculling club as storage space.[9]