Haltwhistle is a small inland town in Northumberland, near Hadrian's Wall and 10 miles east of Brampton in Cumberland. The villages of Plenmeller, Rowfoot and Melkridge are close by. It has a population of 3,811 in 2001.

Well constructed, stone-built houses are still a feature of central Haltwhistle, and though there are none outstanding architecturally the general appearance of the groups is harmonious. The houses were built of local stone, but with the railway, other materials could be brought in.[1] It is one of two settlements in Great Britain which claim to be the exact geographic centre of the island, along with Dunsop Bridge in Lancashire, 71 miles to the south.

The first part of the name is probably derived from Old English heafod, meaning "head" or here a hill-top' or perhaps the source of a stream. If so, it describes the hill-top on which Holy Cross Church and the oldest part of Haltwhistle was built, enclosed on the north-east and west by Haltwhistle Brook and on the south by the South Tyne. Rowland suggests Hal from 'hill'[1] Another possibility is the Old English Halh found in a number of northern towns, meaning "high place" or "temple".

The second part -twistle relates to two streams or rivers, from two Old English words twicce or twise menaing 'twice' or 'division into two' and wella for a stream or brook. Place names with "twisle" generally represent a tongue of land between two streams where they join.[2]

Another suggestion some time made is that "Halt-" is the French haut-, meaning 'high',[3] but since the village already existed long before the Norman Conquest that is most unlikely.

Haltwhistle was probably in existence in Roman days, as it is one of the closest approaches of the River South Tyne in its upland reaches to Hadrian's Wall. The old Roman road or Stanegate passes just two miles to the north of the town.

The development of the town was based on its position on the main Newcastle to Carlisle road and on the Newcastle and Carlisle Railway line.

The expansion of Haltwhistle in the 18th and 19th centuries was due to coal mining in the area and to a lesser extent the use of Haltwhistle as a loading point for metal ores coming from the mines on Alston Moor. In 1836 while some workmen were quarrying stone for the Directors of the Newcastle and Carlisle Railway, on the top of Boreum, a high hill in the township of Thorngrafton and Parish of Haltwhistle, one of them found a copper vessel containing 63 coins, 3 of them gold and 60 copper. The gold coins were, one of Claudius Caesar, reverse Nero Claudius Drusus Germanicus; one of Nero and one of Vespasian.[4]

In the 21st century, the tourist industry dominates the economy with Hadrian's Wall and walking and rambling counting among the principal interests of tourists.

The parish church is the Church of the Holy Cross which stands below the Market Place and gives views over the river and the valley.

Holy Cross is a good example of a North Country church, impressive considering the time when it was built in the thirteenth century. The chancel measures 46 feet by 20 feet, with lancet windows — combined three lights in the east end and four single lights on each side, the walls being supported by buttresses. Inside is a piscine (for washing) and three sedilia (seats for the clergy). There are a number of mediæval grave covers to Blenkinsopps and Thirlwells. The nave measures 63 feet by 46 feet and has side aisles above which are clerestory windows. It has four bays with round columns and pointed arches, looking very spacious inside.

The font, dated 1676, has some curious crude carvings on it, and there is another large circular bowl on a shaft, which is probably an earlier font.

At the west end it has long lancet windows and a bell-cote, again typical of the North country.[1]

Haltwhistle was a market town for the exchange of local goods. In the 18th century two Quakers set up a baize manufactury and there was a weaving establishment. On the Haltwhistle Burn were fulling mills, dyeing and spinning mills. A walk along this stream to the Roman Wall, shows that it must have been a hive of industry with quarries, coal mining and lime burning kilns. The Directory of 1822 (Pigot) gives a whole range of craftsmen, shopkeepers and traders—60 in number, including makers of clogs. The weekly market was held on Thursdays and there were fairs on May 14 and November 22 for cattle and sheep.[1]

Hadrian's Wall to the north of the town is used as a major selling point for the town. The section of the wall closest to Haltwhistle is among the most spectacular and complete, with the wall striding eastwards from the lake at Crag Lough along the spine of the Whin Sill.

Haltwhistle Burn between the town and Hadrian's wall

The remains of Haltwhistle Castle and the series of Bastles, and Haltwhistle Tower. Haltwhistle also claims to be at the geographic centre of Britain - equidistant from the sea as measured along the principal points of the compass. A hotel in the centre of Haltwhistle is named the Centre of Britain Hotel in recognition of this claim. The claim is rather tenuous as it requires that the northern extremity be taken to be Orkney rather than Shetland. Depending on how the centre of the island is calculated however the centre can be said to be Dunsop Bridge in Lancashire.

There are many historic properties nearby, including Featherstone Castle, Blenkinsop Castle, Unthank Hall, Bellister Castle and Thirlwall Castle.

Haltwhistle Viaduct lies to the south of the railway station and was the first major feature on the Alston Line to Alston, Cumberland 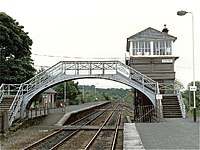 The town is served by Haltwhistle railway station, a halt on the Newcastle and Carlisle Railway, also known as the Tyne Valley Line. The line was opened in 1838, and links the city of Newcastle upon Tyne on the east coast with Carlisle on the west coast. The line follows the course of the River Tyne through Northumberland. The line is also heavily used for freight. The railway station is on the south side of the town close by the River South Tyne.

Until 1976 the railway station was also the northern terminus of the branch line to Alston, in Cumberland, the line was thirteen miles in length. Part of the southern end of the Haltwhistle to Alston line has been reopened as a two-foot narrow gauge railway, known as the South Tynedale Railway, between Alston and Kirkhaugh.

The A69 trunk road which links Carlisle and Newcastle upon Tyne formerly passed south of the town centre and through the western part of the town until a full bypass was opened in 1997.