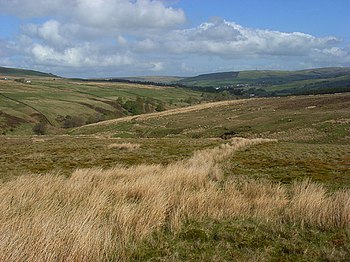 Alston Moor is a moorland overspreading the fells to the south and west of Alston in Cumberland. It gives a name too to the parishes in which Alston and its dependent hamlets fall: a parish with a population of 2,088 at the 2011 census. The eastern edge of the moor may be set at the county's border with Northumberland. Through this western part of the moor, the South Tyne rises and begins to carve a valley down to Alston (north of which it crosses into Northumberland).

The moor is in the northern Pennines in the very east of Cumberland, mostly at an altitude of over 1,000 feet. Hamlets and villages on and about the moor and the dale include Garrigill and Nenthead, along with the hamlets of Nenthall, Nentsberry, Galligill, Blagill, Ashgill, Leadgate, Bayles and Raise.

The moor is part of the vast 'North Pennines Area of Outstanding Natural Beauty'.

The source of the South Tyne is located in the fells above Garrigill. The moor is drained also by the River Nent and the Black Burn which, along with many other smaller streams, flow into the Tyne. The Rivers Tees and Wear also have their sources on the borders of the parish and county.

The manor of Alston or Alston Moor changed hands several times until the 17th century when it passed to the Radcliffe family who held the title Earl of Derwentwater, but after their part in the failed 1715 Jacobite Rising their lands were confiscated by the Crown, and the government assigned the manor to the Admiralty to support the Royal Hospital for Seamen at Greenwich in Kent.

The Greenwich Hospital remained the principal landowner in the parish and owner of the extensive mineral rights up until the 1960s. The estate was then sold to the Trustees for Catholic Purposes, who a few years ago sold their remaining properties in Alston Moor. 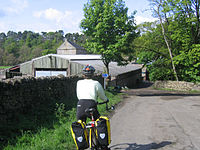 The poet W. H. Auden was to travel a great deal in Britain and abroad, but it is the wild region between the River Tees and Hadrian's Wall which provides the backdrop to many of his poems and plays of the ‘20s and '30s, and echoes at intervals throughout his life. In America in 1947, an Ordnance Survey map of Alston Moor hung on the wall of Auden's chaotic shack on Fire Island. According to his brother John, Auden came to love Alston Moor more than any other place. The poem entitled 'Alston Moor' dates from 1924, as does 'Allendale'.

Alston Moor had some of the largest deposits of lead and zinc ores in Britain. Lead was probably mined in Roman times. The Romans built a fort at Whitley Castle, and pieces of lead ore and slag have been found there, though no other traces of their work remain. There are various references to the mines of the area between the 12th & 16th centuries. Most emphasise the value of the silver, which makes up a small (<1%) proportion of the lead ore. This made the mines of interest to the Crown, who charged rents on the silver production. When Sir Edward Radcliffe, Earl of Derwentwater bought the estate in 1629 for £2,500, the mines were believed to be virtually exhausted.

From the 18th century, Greenwich Hospital leased the rights to mine for lead and other minerals to a number of companies. The most significant of these was the London Lead Company, but other smaller companies and partnerships also took on leases, with varying degrees of success. The London Lead Company's work led to Alston Moor becoming one of the main lead producing areas in the country by the mid-19th C, especially around Nenthead. The population of the area rose to a peak of around 5,000 in this period. By the 1860s, cheaper imports were making the local lead industry unprofitable, and by 1896 the leases had passed to the Vieille Montagne company, who worked the mines for zinc, which had earlier been of little commercial value.[2]

The 20th century. saw a gradual decline in mining and the prosperity it had brought to the area and little remained of the industry after the Second World War. Today the remains of the smelt mill at Nenthead Mines[3] can be seen. A few of the old mines are accessible but must only be explored with expert guidance. The traces of hundreds of other small mines, shafts and spoil heaps are merging into the landscape.

Alston Moor Golf Club is the third-highest golf course in the United Kingdom, at 1,476 feet above sea level,[4] exceeded only by the West Monmouthshire Golf Club in the Brecon Beacons and Leadhills Golf Club in Lanarkshire.

The Club was founded in 1905 and has occupied numerous sites over the years. The first course was at Black House Farm, but the course is now located on the Hermitage Farm site. The official opening was on Easter Monday 1906, although there is evidence that a club was in existence for quite some time before this date.[5]