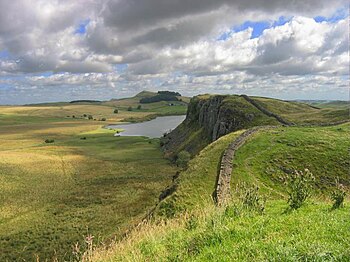 The Whin Sill at Crag Lough

The Whin Sill or Great Whin Sill is a tabular layer of the igneous rock dolerite extending from the North Riding of Yorkshire, through County Durham and on to Northumberland, stretching from Teesdale northwards towards Berwick-upon-Tweed.

The Great Whin Sill is one of the key natural features of the North Pennines. A major outcrop is at the High Force waterfall in Teesdale, on the border of Yorkshire with County Durham. Bamburgh Castle, Dunstanburgh Castle, Lindisfarne Castle and stretches of Hadrian's Wall all strategically take advantage of high, rocky cliff lines formed by the sill.

The Whin Sill complex is usually divided into three components: Holy Island Sill, Alnwick Sill and the Hadrian's Wall-Pennines Sill, which were created by separate magma flows but about the same time.[1]

The Little Whin Sill is an associated formation to the south in Weardale.

As with much of terminology of the rougher end of geology, the name ‘Whin Sill’ originates in the mouths of the quarrymen of Yorkshire and Durham. The term 'sill' is used to describe a more or less horizontal body of rock. 'Whin' was applied to dark, hard rocks. As the intrusive igneous origin of the Whin Sill was determined in the 19th century, the term 'sill' was adopted by geologists for concordant, tabular intrusive bodies.

Towards the close of Carboniferous Period some 295 million years ago (Ma), crustal extension caused by movement of the Earth’s tectonic plates allowed the emplacement of igneous intrusions of magma across much of northern England of a suite of tholeiitic dolerite intrusions. These were largely concordant with the strata of the existing country rock. On cooling, these crystallised and solidified to form the Great Whin Sill.

It underlies much of south and east Northumberland and the Durham Coalfield. Its maximum known thickness of around 230 feet occurs in the North Pennines.

Surface and subsurface records of the Great Whin reveal it is not always concordant over wide areas and often rises and falls in the stratigraphical succession in marked leaps and gentle transgressions different levels.

The lithology is notable in many respects, including well developed pegmatite segregations which can be found in Upper Teesdale. Late stage hydrothermal mineralisation has filled the joints with pectolite. The dolerite has been carbonated as metasomatic selvages into veins and joints and other flaws to produce 'White Whin'. Thermal metamorphism of the country rock in the contact zone produced coarse grained marbles within the aureole in a small number of places in Teesdale.

Disused roadstone quarries along the course of the sill offer sections for its interpretation.

Effects on landscape and geography

The resistance to erosion of the dolerite gives rise to a number of striking geomorphological features such as High Force; Low Force; Cauldron Snout; High Cup Nick and Holwick Scars.