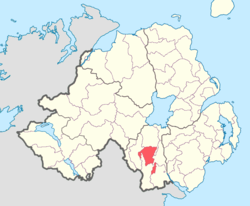 Fews Lower is a barony in County Armagh.[1] Its lies in the centre of the county, with an enclave lying just to the south-east. The main portion is bordered by four other baronies: Armagh to the west; Oneilland West to the north; Orior Lower to the east; and Fews Upper to the south. Fews Upper and Orior Lower also border the enclave to its north and west, with Orior Upper to its south-west.[1] The Fews Mountains run through both Fews Lower and Upper, the highest peak of which in Fews Lower is, Deadman's Hill, which stands at 1,178 ft.[2] The name is from the Irish Feá/Feadha, meaning "the woods".[3][4][5]

Below is a list of settlements in Fews Lower:[6]