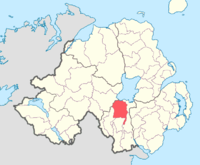 Oneilland West is a barony in County Armagh.[1] It is also called Clancann (Clann Chana),[2] after the McCann clan.

Oneillland West lies in the north of the county on the south-western shore of Lough Neagh and the border of Tyrone. It is bordered by five other baronies: Armagh to the west; Dungannon Middle to the north-west; Oneilland East to the north-east; Orior Lower to the southeast; and Kinelarty to the south.[1]

Mount Roe house is located in this barony.[3] The Battle of the Diamond on 21 September 1795, which led to the foundation of the Orange Order, occurred within this barony at The Diamond crossroads.

Towns and villages of Oneilland West are:[3]

The civil parishes in Oneilland West are:[4][5]