Eastoft is a village and civil parish on the Yorkshire-Lincolnshire border. The western side of the village falls within the ancient parish of Adlingfleet in the West Riding of Yorkshire, while the eastern side forms part of Crowle in Lindsey. The border runs right down the centre of the village with the High Street on the Lincolnshire side. A parallel road runs on the Yorkshire side: the aptly named "Yorkshire Side", which forms part of the A161.

The etymology of the name is disputed. Mills notes that the place name was written as Eschetoft around 1170, and suggests an Old Scandinavian origin, with the name formed from eski and toft. On this basis, it would mean "Homestead, house or curtilage where ash trees are growing".[1] North Lincolnshire Council derive the name from toft, a homestead with an enclosure, and the fact that it was located to the east of Crowle. On this basis, it would be "Homestead with enclosure to the east of Crowle.[2]

The earliest known record of Eastoft dates from 1164, when there was a dispute between the Vicar of Adlingfleet and the abbot of Selby. Both claimed rights to the tithes from Reedness and Eastoft, and the dispute was settled when the Archbishop of York intervened, and ruled that the vicar of Adlingfleet should receive the tithes during his lifetime, but that he should make a payment of 40 shillings each year to the Abbey at Selby.[2]

Eastoft became a separate ecclesiastical parish on 25 September 1855, when it was created from parts of Adlingfleet and Crowle. In 1900 Kelly's Directory noted that although it was a single ecclesiastical parish, it was still two civil parishes, known as Eastoft, Yorkshire and Eastoft, Lincolnshire. The area of the parish was listed as 1,327 acres in Yorkshire and 1,312 acres in Lincolnshire. The church, the school and the vicarage are all located in Yorkshire. William Coulman was a Justice of the Peace and lived in Eastoft Hall, Yorkshire, while William Halkon lived at Eastoft Hall, Lincolnshire. The plantation next to Halkon's residence had once housed a chapel of ease and a burial ground, but all traces of them had gone by 1900.[2]

The River Don used to run directly through the middle of the village, on its route to its confluence with the River Trent near Adlingfleet.[3] However, in 1626, Cornelius Vermuyden began the drainage of Hatfield Chase, and re-routed the river northwards from Stainforth to join the River Aire. He also re-routed the River Idle and the River Torne, both of which joined it at Sandtoft and contributed to its flow.[4] Before the drainage, the quality of the soil was poorer than soils on the higher areas of the Isle of Axholme. Land in Epworth, Haxey and Owston Ferry could be used for growing crops every year, but in Crowle and Eastoft, crops were normally grown for three years, and the land was left fallow for the fourth.[5]

The Paupers Drain to the south of Eastoft predates the works of Vermuyden. Following his work, there was social unrest, which was not finally resolved until 1717. After that, some improvements to the drainage of the area were made, including a new sewer, which crossed the Pauper's Drain, and was designed to remove water from Eastoft, Crowle and Luddington. It drained into the River Trent through a sluice at Keadby, but the sluice failed in 1761, resulting in devastating floods.[6]

Between 1903 and 1965, the village was served by Eastoft railway station on the Fockerby branch of the Axholme Joint Railway, although passenger services ended in 1933. The station was by the main road over a mile and a half to the north of the village,[7] and the first sod was cut on 22 September 1898 by William Halkon of Eastoft Hall, the chairman of the directors, on land which was part of Boltgate Farm and belonged to Mr. Bramhill. Following the ceremony, toasts were made in the farmhouse.[8] One of the contractors' locomotives used in the building of the line was named Halkon, after the chairman, and was used to convey a special train when the North Eastern Railway inspected the line, before taking it over from the original company. At the time, only Eastoft station was finished, and was cited as an example of how the others should be completed.[9] The final train carrying passengers was chartered by North Axholme Secondary School and ran on 1 April 1965, four days before closure. The opening of the crossing gates over the A161 road at Eastoft was featured in television coverage of the event.[10]

The village is a linear settlement along the A161 between Crowle and Goole, and includes a junction with the B1392 road leading to the village of Luddington. It comprises more than 2,600 acres, and for the most part is little above sea-level. The parish is drained by a network of drainage ditches, which feed into the Adlingfleet Drain, running north-eastwards from the site of the railway crossing on the A161, and by the Pauper's Drain, running eastwards along the southern edge of the parish.

The Anglican parish church, which is dedicated to St Bartholomew, and was built in 1855 to the designs of J. Pearson, Esq., is a Grade II listed structure. It is built in Gothic Revival style and consists of a chancel with vestry on the north side, a nave with a porch on the south side and a bell gable,[11] containing three bells. The church is situated on the Yorkshire side of the village and was consecrated by Thomas Musgrave, Archbishop of York, on 13 November 1855. The village has a Methodist church, which was built in 1869, and occupies a site which was once the bed of the River Don.[12] In 1885 Kelly's Directory reported two chapels, a Primitive Methodist, and a Methodist New Connexion.[13]

Eastoft Hall is another Grade II listed building, built on Eastoft High Street in 1789. It is built of red-brown brick, some of which is rendered, with a slate roof. The east front has four bays, and the building was modified in the early-19th century and in 1905. A screen wall, some outbuildings and an attached gardeners cottage are also included in the listing.[14] There is a second building also called Eastoft Hall, on Luddington Road, finished in stucco with ashlar dressings, which was built in the mid-18th century and modified in the mid-19th century.[15] 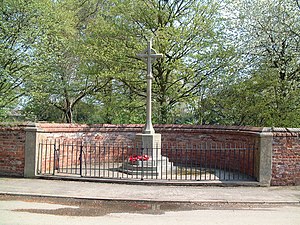 To the south of the village stands a Church of England Primary School, which was opened by Mrs. R. H. Coulman on 28 November 1961. It was dedicated by Leslie Stannard Hunter, the Bishop of Sheffield, and is situated very close to the site of the original school, which was built in 1847, largely as a result of the efforts of the Vicar of Adlingfleet, Rev. F. Sugden. It was extended in both 1873 and 1902.[12]

The village war memorial is sited in a semi-circular enclosure and bears the names of the men who gave their lives in the two World Wars.[16]

Eastoft also has a village green, village hall, and The River Don public house. A post office-cum-corner shop closed in 2008, as part of cutbacks which involved the closure of 42 post offices in the region. It was replaced by a Post Office Outreach service, where post office services were provided in the Village Hall by a travelling post master, initially on Tuesday mornings and Thursday afternoons.[17]