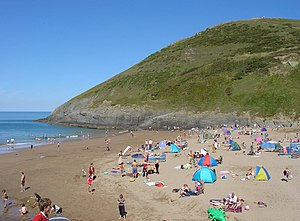 The beach at Mwnt 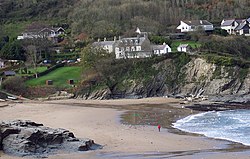 The beach at Aberporth 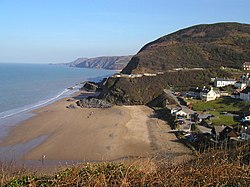 Tresaith from the coast path

The Ceredigion Coast Path is a waymarked long distance footpath following the coast of Cardiganshire along Cardigan Bay from Cardigan (52°4’52"N, 4°39’39"W), at the border with Pembrokeshire, to Ynyslas (52°31’38"N, 4°2’58"W), which is a little south of the estuary of the River Dovey, which river marks the boundary with Merionethshire. The path is 65 miles long in total.

The path is named after an old Welsh name for Cardiganshire, Ceredigion, which is also used by the local council in both languages. It forms one section of the Wales Coast Path, an 870-mile long-distance walking route around the whole coast of Wales from Chepstow in Monmouthshire to Queensferry in Flintshire, which route was opened in 2012.[1]

The Ceredigion Coast Path project was funded by taxpayers' money and a European scheme for West Wales and the Valleys. There were previously existing lengthy public rights of way along the coastline, but the scheme allowed for these to be linked together – by creating new public access routes – to make a continuous route. The path was opened throughout in July 2008.

The coast path runs along the 'Welsh Heritage Coast' from Cardigan northwards along Cardigan Bay to Ynyslas near (Borth), a little to the north of Aberystwyth. The official start, in Cardigan, is the bronze otter next to the bridge on the northern bank of the River Teifi. (SN177458) The end is at the Ynyslas war memorial. (SN609940)[2]

The path crosses a variety of landscapes, such as the dune system at Ynyslas, high cliffs, storm beaches, sandy bays and sea caves. The path passes through small villages and some well-known tourist resorts and offers a close insight into this stretch of coast.

Four sections of the Cardiganshire coast are designated as 'Heritage Coast', and two areas within Cardigan Bay are marine Special Areas of Conservation because of their importance for wildlife.[3] This section of coastline is renowned for bottlenose dolphins, grey seals and porpoises. 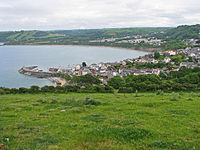 New Quay from the coast path

The route of the Coast Path can be accessed by road at a number of points, so that it can readily be split into the following eleven sections:

Some of the sections are challenging, given the undulating nature of the path, but some of the flatter sections are quite suitable for walkers of lesser or limited ability. Recently, for instance, work completed between Aberporth and Tresaith has re-routed the path to avoid steps.

Whilst a long-distance path in its own right, it is linked at both ends as part of the Wales Coast Path. At its southern end, via the old bridge over the River Teifi in Cardigan, the nearest crossing point to the coast, it meets the Pembrokeshire Coast Path at St Dogmaels. 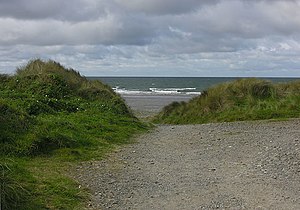 Many of the coastal villages and towns were visited by the Cardi Bach bus service run between Cardigan and New Quay, particularly aimed at walkers. Introduced in 2004, it initially carried 1,000 passengers a year and only ran in the summer. Funding though ended in September 2014 and the service closed.[4]

The northern part of the Coast Path, at Borth and Aberystwyth, can be accessed by train on the Cambrian Line.