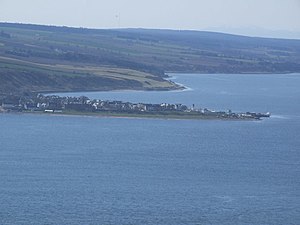 Cromarty and the Black Isle's coast from across the firth

The Black Isle (Gaelic: an t-Eilean Dubh) is a peninsula on the North Sea coast of the Highlands divided between the interlaced counties of Ross and Cromarty: Cromartyshire holds the head of the peninsula at Cromarty and much of its northern parts, while Ross-shire has the rest apart from a detached part of Nairnshire by the head of the Cromarty Firth. 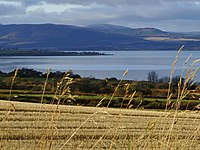 The Black Isle is not an island but a peninsula, surrounded on three sides by water – the Cromarty Firth to the north, the Beauly Firth to the south, and the Moray Firth to the east. On its fourth, western side, its boundary is delineated by rivers. The River Conon divides Maryburgh, a mile outside Dingwall, from Conon Bridge which is the first village on the Black Isle from the north-western side. Its south-western boundary is variously considered to be marked by either a minor tributary of the River Beauly separating Beauly (in Inverness-shire) and Muir of Ord (on the Black Isle, in Ross-shire), dividing the two counties and also delineating the start of the Black Isle; or alternatively, the River Beauly itself, thus including Beauly in the Black Isle.

Castles on the Black Isle (whether ruinous or otherwise) include Castlecraig, Redcastle, and Kilcoy Castle. Cromarty House stands on the site of former Cromarty Castle and is built in part from its reclaimed stone and timbers. Kinkell Castle has been recently restored. Former castles of the Black Isle for which there are no physical remains include Castle Chanonry of Ross and a mound indicating the former site of Ormond Castle.

The Isle was originally named Ardmeanach, from the Gaelic words ard (‘height’) and maniach (‘monk’), from an old religious house on the wooded ridge of Mulbuie), and it derived its customary name from the fact that, since snow does not lie in winter, the promontory looks black while the surrounding country is white.

Rosehaugh, near Avoch, belonged to Sir George Mackenzie ("Bluidy Mackenzie" the Lord Advocate, founder of the Advocates' Library in Edinburgh, not his like-named contemporary, the 1st Earl of Cromartie). "Bluidy Mackenzie" earned his nickname from his persecution of the Covenanters.

Redcastle, on the shore, near Killearnan church, dates from 1179 and until recently could claim to be one of the oldest inhabited houses in the north of Scotland; it was vacated and effectively rendered uninhabitable in 1950. On the forfeiture of the Earldom of Ross, Redcastle became a royal castle and afterwards passed for a period into the hands of the Mackenzies of Gairloch.

The Black Isle was one of the earliest parts of the northern Highlands to experience the clearances and was settled with many Lowland shepherds and farmers, especially from the north east.

The Black Isle was the site of a community protest against genetically modified agriculture.[1]