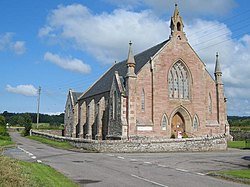 The Tore Gallery: An art gallery housed in the former Killearnan Free Church

Killearnan is a parish in Ross-shire, three miles east of Muir of Ord. This place is said to have derived its name from the circumstance of its having been the burial-ground of Irenan, a Danish prince, the prefix Kill, signifying a chapel, church, or cemetery. On the northern boundary of the parish, a sepulchral monument called Cairn-Irenan still exists and it is probable that the Danes had a settlement here. The surrounding parishes are Knockbain to the east, Urquhart and Logie Wester to the north and Urray to the west.

Tore, in the centre of the parish, is the meeting place of the A9, A832 and A835 roads. The A832 connects with Muir of Ord and Cromarty and the A835 starts here and connects with Ullapool.

The parish church is thought to be sited on Pictish foundations, although the earliest visible foundations of the present building date to circa 1390. In 1238 Pope Gregory IX established a prebend at Chanonry, thus founding the parish of Etherdouer that was later to become known as Killearnan. There was also a ‘hospital’ of the Knights Hospitallers at Spital Shore, first recorded in 1299. One wall with a triple-lancet window was recorded still standing in 1882 but there are no visible remains today.

Since the opening of the Kessock bridge in 1982, the new A9 trunk road leading north has encouraged the development of Killearnan as commuter area for Inverness.

This Ross-shire article is a stub: help to improve Wikishire by building it up.
Retrieved from "https://wikishire.co.uk/w/index.php?title=Killearnan&oldid=31270"
Categories: