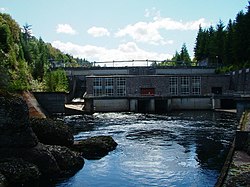 The River Beauly (Gaelic: Abhainn nam Manach) is a river in Inverness-shire, about 10 miles west of Inverness, which flows down from the hills and ultimately opens to the North Sea in the Beauly Firth.

The Beauly is about 15 miles long, beginning near the village of Struy, formed by the union of the River Farrar and the River Glass (57°25’17"N, 4°39’10"W). The river meanders as it flows east, passing to the south of the village of Beauly and into the Beauly Firth.

The river was first bridged in 1814, when Thomas Telford constructed the Lovat Bridge about half a mile south-west of Beauly. This bridge carried the main route north, until the Kessock Bridge was opened in 1982. A railway bridge across the river on the outskirts of Beauly was built in the 1860s to carry the Inverness & Ross-shire Railway (now known as the Far North Line). Another road bridge, near Kilmorack, was built in the 20th century. 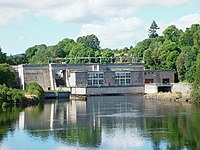 The river is part of the Affric-Beauly hydro-electric power scheme, with dams and power stations at Aigas and Kilmorack. Both have 20 MW generators and include fish ladders to allow salmon to pass, the Aigas fish ladder is open to visitors in the summer.

Eilean Aigas is an island in the river.