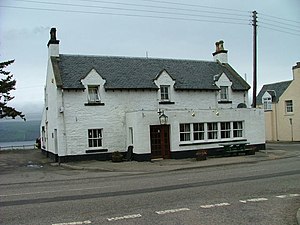 Culbokie is a small village on the northern shore of the Black Isle in Ross-shire. The name is from the Gaelic An Cùil Bhàicidh, meaning 'the haunted nook'.

The village is just under four miles north-east of Dingwall and about 12 miles north of Inverness. There is one school, a shop/post office, a public house (the Culbokie Inn) and Findon Hall. According to the census of 2001, the population was 866.

Culbokie has a thriving range of community and youth groups, including Beavers, Cubs, Scouts, Badminton, Playgroup, Football and a Senior Citizens club. Once a month in Findon Hall there is a community market where a wide variety of local produce and crafts can be bought.

It is known for its spectacular scenery and its old-world ambiance including an authentic water pump from the early 19th century. The village looks onto the munro Ben Wyvis, adjacent to the town of Dingwall.

The village is a popular commuter location for people who work in Inverness.

This Ross-shire article is a stub: help to improve Wikishire by building it up.
Retrieved from "https://wikishire.co.uk/w/index.php?title=Culbokie&oldid=46848"
Categories: