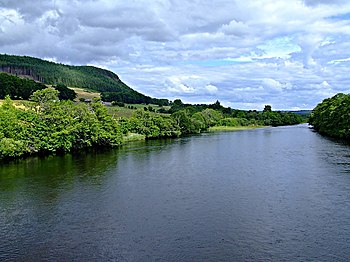 The River Conon from Moy Bridge

The River Conon flows through the Highlands, in Ross-shire.

The Conon begins its course flowing out of Loch Luichart, and from here it flows in a south-easterly direction. It is joined by the River Meig at Scatwell before entering Loch Achonachie.

Having left Loch Achonachie the Conan is joined by the Black Water at Moy Bridge, and the River Orrin at Urray, before flowing past Conon Bridge and into the Cromarty Firth (and thence the Moray Firth) to the open sea.

There are several islands in the river, including Moy Island, Dunglass Island and Garrie Island.

The river has been harnessed to serve the Conon hydro-electric power scheme, with dams at Loch Luichart and Loch Achonachie, and power stations at Luichart and Torr Achilty.

The river is said to have once been the home of a water horse.[1]