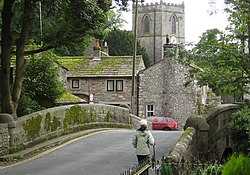 Kettlewell is a village and parish in Upper Wharfedale in the West Riding of Yorkshire. It lies six miles north of Grassington, at the point where Wharfedale is joined by a minor road which leads north-east from the village over Park Rash Pass to Coverdale. Great Whernside rises to the east. The population of the civil parish was 322 at the 2011 census,[1] with an estimated population of 340 in 2015.[2] 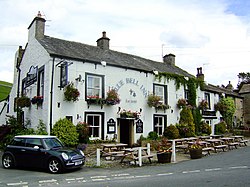 It is believed that the name Kettlewell is Anglo-Saxon[3] and comes from Chetelewelle which means a bubbling spring or stream.[4] Signs of the farming methods of Romano-British and early mediæval agriculture can still be seen in terraced fields to the north and the south of the village.[5]

In the 13th century a market was established in Kettlewell, which became a thriving community. The Thursday market mostly sold corn outside the King's Arms.[6] Textiles (and, in the late 18th and early 19th centuries, lead mining) revitalised the village and Kettlewell's appearance today derives much from its past 200 years. The remains of the smelting-mill, used from 1700 to 1880, can be seen near the meeting of Cam Gill and Dowber Gill Becks half a mile above the village.

In 1686 Kettlewell and Starbotton were almost destroyed in a flood. Heavy rainfall descended on the adjacent hills and cascaded down into the village demolishing several houses and causing the residents to flee.[7]

On 5 July 2014, the Tour de France Stage 1 from Leeds to Harrogate passed through the village.[8]

Kettlewell is situated in Upper Wharfedale around two miles upstream of where it converges with Littondale. The B6160 crosses the River Wharfe by a stone bridge. The village is situated just west of the confluence of Dowber Gill Beck and Cam Gill Beck, which join to form Kettlewell Beck flowing through the village to join the River Wharfe. There are many small bridges across Kettlewell Beck which dissect the village. 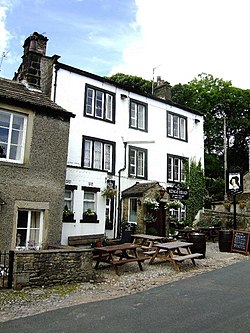 Historically Kettlewell's economy revolved around lead mining and farming. Farming was adversely affected by the 2001 foot-and-mouth outbreak. There are several farms which mostly rely on sheep farming. There is a small service economy serving village residents, tourists and walkers. Kettlewell is on the Dales Way and is a popular starting point for ascents of Great Whernside and Buckden Pike. Rights of way connect the village to Nidderdale and Arncliffe in Littondale. The village pubs are on the Inn Way and the Racehorses Hotel and the Bluebell Inn provide accommodation. The village has three inns; the Racehorses, the Blue Bell and the King's Head, numerous guesthouses, holiday cottages and a village shop, an outdoor-pursuit shop and filling station with a mechanic's garage. There is a large YDNPA car park and the National Park Authority operates public conveniences adjacent to the main car park. 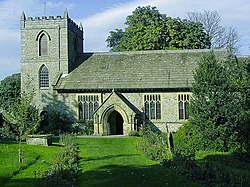 The village has 17th- and 18th-century houses, including the vicarage. The church, St Mary's, as we see it today was rebuilt during the 19th century and stands on a site that dates back to 1120 when the (Norman) de Arches family established a church here.[7] An example of 20th-century architecture is the 1960s-built chapel at Scargill House, which is now a Christian conference centre.[9]

Kettlewell is connected by bus to Skipton, Grassington and Buckden.[10] The village is the northern starting point of the 104-mile Yorkshire Water Way to Langsett Reservoir.[11] Kettlewell lies on the Dales Way footpath.

The area is known for Swaledale Sheep which are extensively farmed in the area. There are deer in the area, though these are rarely sighted. There are areas of forestland to the south-east of the village, while the open valley to the north has little tree cover.

In August the village hosts a scarecrow festival where scarecrows, dressed up as different characters are placed around the village.[12]