Scargill House is a country house in Wharfedale, in the West Riding of Yorkshire which is now a Christian conference centre, run by the Scargill Movement,[1] a charity.

Scargill House stands three-quarters of a mile south of the village of Kettlewell and four miles from Grassington. The nearest market town, Skipton, is 14 miles away. The house dates from the eighteenth century and is built of stone, rendered and colour-washed, under a stone flag roof. The chapel was built in 1960 and is itself Grade II*-listed.

The woodland at Scargill is accredited by the Forest Stewardship Council as a highly important conservation site.

The house was built as a farmhouse in the late nineteenth century, and early photographs show a modest house.

In 1900, Clement Holdsworth bought Scargill House from John Overend Wood as a residence from which he shot grouse on Conistone Moor and fished for trout on the River Wharfe. Over the ensuing decades the house was improved and extended to turn it into a fine country house with a grand estate. It remained in the Holdsworth family for almost 57 years until William Holdsworth sold the house and estate at auction to the Church of England in November 1957.[2]

The estate was described in the auction catalogue as an exceptional residential, agricultural and sporting property extending to 1,050 acres, which included:

The catalogue claimed that the invigorating air and the completely unspoilt grandeur of the surroundings make the Property a most attractive and healthy resort; and that the grounds of the house included a tree-lined drive, stone-pillared and wrought iron entrance, lawns and an ornamental water garden.

The chapel at Scargill House 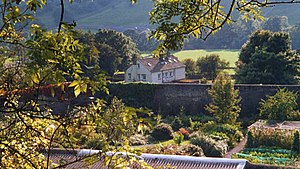 The walled garden at Scargill House

Scargill was sold to the Church of England for the establishment of a Christian Community in 1957 after William Holdsworth had decided to live on his Irish estate at Bellinter House. In 1959 Scargill became a centre for conferences and events specialising in multi-faith, youth and environmental issues.

Since then, it has been largely reconstructed and extended to cater for the many groups that use its facilities. In 1960, a chapel was built by George Pace of York in a Scandinavian style reflecting the location's history, and is now listed.

In 2008, it was announced that the centre would be closing on 20 July 2008 due to financial difficulties, and profits from the sale of the estate would be used to set up a foundation.[3][4] It was put on the market for £2.5 million.[5]

It was sold in March 2009 to a newly formed registered charity called the Scargill Movement, who are committed to continuing and developing Scargill House in continuation of its original vision, ministry and mission as a “Lee Abbey of the North”. It will continue as a Christian centre run by a resident community, providing “a resource for the Church, providing a safe place for individuals and groups to meet with God and one another.”[1] The sale price of £1,295,000 was made possible by an individual donation plus a one-year loan from the Lee Abbey Movement.[2]