Great Whernside is a high fell in the West Riding of Yorkshire and at the heads of the Yorkshire Dales. It should not to be confused with the better known Whernside, some 17 miles to the west.

Great Whernside stands at the head of both Wharfedale and Nidderdale, forming the watershed between them. It is also on the boundary between the Yorkshire Dales National Park and the Nidderdale Area of Outstanding Natural Beauty. The summit of Great Whernside is the highest point of the eastern flank of Wharfedale above Kettlewell. 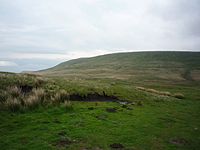 The River Nidd rises on the eastern slopes of Great Whernside, above Angram Reservoir.