Winsford is a town in Cheshire. It lies on the River Weaver south of Northwich and west of Middlewich, and grew around the salt mining industry after the river was canalised in the eighteenth century, allowing freight to be conveyed northwards to the Port of Runcorn on the River Mersey.

Winsford is split into two neighbourhoods: Over on the western side of the River Weaver and Wharton on the eastern side.

Kings Henry III and Edward I occasionally held court at Darnhall near Winsford. The latter king founded Vale Royal Abbey at Darnhall, but then moved it in 1277 to near Whitegate.[1] By around 1280, a charter had been granted to form a new town near the Abbey, centred on the present-day Delamere Street in Winsford. From this charter can be traced the origins of the market that is still held in the town.

Parliament authorised for improvements for navigation to the River Weaver in 1721 to allow large barges to reach Winsford from the port of Liverpool.[2][3] At first, this was the closest that barges carrying china clay from Cornwall could get to the Potteries district of north Staffordshire, which was then rapidly developing as the major centre of ceramic production in Britain.

Cornish china clay was used in the production of earthenware and stoneware. The clay was taken overland from Winsford by pack horse to manufacturers in the Potteries, a distance of about 30 miles. Locally produced salt was also transported to the Potteries, for use in the manufacture of salt-glazed stoneware. Finished ceramics from the Potteries were brought back to Winsford, for export through the port of Liverpool. That trade ended in the 1780s when the Trent and Mersey Canal opened and carried the goods through Middlewich, bypassing Winsford.

The canalised River Weaver was the inspiration for the Duke of Bridgewater's canals, and later the engineer for the Weaver Navigation, Edwin Leader Williams, designed and built the Manchester Ship Canal.

From the 1830s, salt became important to Winsford, partly because the salt mines under Northwich had begun to collapse and another source of salt near the River Weaver was needed.[4] A new source was discovered in Winsford, leading to the development of a salt industry along the course of the River Weaver, where many factories were established. By 1897, Winsford had become the largest producer of salt in the United Kingdom. As a result, a new town developed within a mile of the old Borough of Over which had been focused on Delamere Street.[2] Most of the early development took place on the other side of the river, with new housing, shops, pubs, chapels and a new church being built in the former hamlet of Wharton. As the prevailing winds blew the smoke away from Over, it became the place for the wealthier inhabitants to live.[3] However, barge workers and others working in Winsford started to develop the area along the old Over Lane, now the High Street. The old Borough tried to keep itself separate but had been connected by the 1860s.[5]

By the Second World War, employment in the salt trade had declined as one company took control of all the salt works and introduced methods of manufacture that needed much less labour. Slum clearance started in the 1930s and, by the 1950s, three new housing estates had been built on both sides of the river to replace sub-standard homes. However, even in the 1960s, Winsford could be described as "one long line of mainly terraced houses from the station to Salterswall".[5]

The town experienced a major expansion in the late 1960s and 1970s as the town planners took over. Two new industrial areas were developed, on both sides of the town, new estates of council and private housing and a new shopping centre with a library, sports centre, civic hall and doctors' surgeries. But the town's population did not grow as much as planned, so the new civic buildings were too large for the population.

The expansion led to a mix of people in the town, comprising the original Cheshire residents, a wave of migrants from Manchester, and a second and much larger wave of newcomers from Liverpool. There was (and to some extent still is) some friction between "Old" and "New" Winsfordians. The term "Woolyback" for "Old" Winsfordians was a common term of abuse related to their supposed rural roots. These tensions have now greatly subsided.

The local hamlets and villages of Moulton, Darnhall, Stanthorne, Whitegate, Wettenhall are all within the towns limits and use the town’s resources 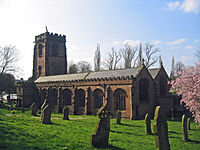 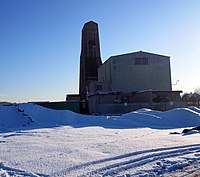 The UK's largest rock salt (halite) mine is at Winsford.[6] It is one of only three places where rock salt is commercially mined in the United Kingdom, the others being at Boulby Mine in Yorkshire, and Kilroot, near Carrickfergus in County Antrim.

Rock salt was laid down in this part of Great Britain 220 million years ago, during the Triassic geological period. Seawater moved inland from an open sea, creating a chain of shallow salt marshes across what is today the Cheshire basin. As the marshes evaporated, deep deposits of rock salt were formed.

Extraction began at Winsford in the 17th century. Initially it was used only as salt licks for animals, and to strengthen weak brine. In 1844 Winsford Rock Salt Mine was opened, and is claimed by its operator, Salt Union Ltd., to be "Britain's oldest working mine".[6] Salt Union Ltd. is part of the US-owned group of companies Compass Minerals. Today, rock salt is quarried from a depth of some 500 feet below ground, producing salt (commonly known as "grit") for use as a de-icing agent on roads. The mine produces 1 million tons of rock salt annually, and has a network of 135 miles of tunnels over several square miles underneath the area between Winsford and Northwich.

A worked-out part of the mine is operated by DeepStore Ltd.,[7] a records management company offering a secure storage facility. Confidential government files, hospital patient records, historic archives belonging to The National Archives, and business data are stored in the mine, where the dry and stable atmosphere provides ideal conditions for long-term document storage.

This church, off Swanlow Lane, is the most well-known local historical landmark. One of the most popular local stories is that St Chad's Church was originally built in Over Square, but the devil was so angry at the people's use of it that he decided to fly off with it. The monks at Vale Royal Abbey were said to have seen him and rung the abbey bells so that it was dropped at its current location.[8] In fact, its location is probably due to it having always belonged, along with its tithes, to St Mary's Convent in Chester. This presumably convinced the Abbot to build the town far enough away from the Church in order to gain the tithes himself.

By St John's Church of England Primary School, on Delamere Street, is a rare (possibly unique) lock-up/monument built in the 19th century.[9] The Over Market met nearby, and the Cross was used to lock up drunks, thieves and swindlers until the magistrates court at the George and Dragon on the edge of Delamere Street was in session. The building is in the form of a stepped pyramid surmounted by a cross. The door to the lock-up is still visible but was blocked up in the 1970s.[9]

Many invented tales of buried treasure and secret passages are told about the Cross but none is true. The nearby street name of Saxon Crossway was invented by the Borough Council in the 1960s.[9] The real Saxon Cross is preserved at St Chad's Church.[10] 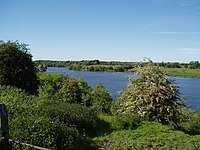 The Winsford Flashes are the town's most notable geographical feature. In referring to them as the "Cheshire Broads", a comparison is made with the better-known Norfolk Broads.[11] "Flash" is a local dialect word for "lake", with a regional distribution centred on the north-west counties of Chester and Lancaster. The Winsford Flashes (Top Flash, Middle Flash, and Bottom Flash, the largest) are three lakes along the course of the River Weaver, extending over some 200 acres.

The flashes formed in the 19th century (cartographical evidence dates their formation to between 1845 and 1872), due to the subsidence of surface ground into underground voids.[12] The voids were largely the result of brine extraction, in which rock salt deposits were dissolved and washed out by water. As the ground slumped into the voids, the River Weaver widened at each point, until lakes were made where arable land had once been.

From the late 19th century, Winsford Flashes became popular with working class day-trippers from the nearby industrial centres of Manchester and the Staffordshire Potteries. Visitors came in large numbers for a day's leisure boating, picknicking, and sightseeing.[13]

The Winsford Flashes were never developed as a public amenity, and their popularity soon fell into decline. Today, they are primarily enjoyed by the local community, and are used for sailing (Winsford Flash Sailing Club is based on the 90 acre Bottom Flash[14]), fishing, and walking. They support a wide range of wildlife, with several species of migrant wildfowl, such as Canada geese, using them as an overwintering destination.

Brunner Guildhall, from across the High Street

St John's Church on Delamere Street dates from 1863 when Lord Delamere of Vale Royal commissioned the young architect John Douglas to build it as a memorial to his deceased wife.[15] This is the tallest building on the highest part of Over, so the spire can be seen for miles around.[15]

The Brunner Guildhall, which now houses the Citizens Advice Bureau, was built in the late 19th century. It is a two-storey building built in Flemish Gothic style, and carries the date 1899. It was built by Sir John Tomlinson Brunner, who gave it to Winsford Urban District Council, to be used for Trade and Friendly Societies, and other public purposes. It was given its name by the chairman of the council in recognition of Brunner's generosity.[16]

Parts of the Knights Grange pub, Grange Lane, which was once a farmhouse and belonged to Vale Royal Abbey, were built in the 17th century.[17]

Littler Grange, now a children's nursery, is the best remaining half-timber building in Winsford, including sloping floors on part of the first floor.[2]

Dawk House on Swanlow Lane is a largely unaltered timber framed farm, covered in white stucco probably during the reign of Queen Anne, including the date 1711.[2]

Blue Bell Inn by St Chad's Church, now also a children's nursery, is an exact replica of a mediæval building that burned down in the 1960s.[2]

The Allotment gardens] at Moss Bank, Over, date from 1924, when William Stubbs of 'Leahlands', Swanlow Lane, sold a 4-acre field behind High Street to Winsford Urban District Council, 'for the purpose of the Allotments Act'.[18] The field, named on the 1846 Over Parish Tithe Map as 'Well Field', had been farmed since at least the seventeenth century, and its conversion to allotments secured its use for future generations. The site shrank in the 1960s and 1970s with the building of housing and an electricity sub-station along Moss Bank, but the acquisition in 1970 of land adjacent to Over Recreation Ground brought it to its present size.

In the late 1980s, a record-breaking pumpkin was grown on the allotments. Weighing in at 579 lb, it held the national record for a time.

The allotments (about 50 plots and 5 raised beds) are owned and managed by Winsford Town Council. The plot-holders have their own organisation, Over Allotments and Leisure Gardeners' Association. Lottery funding has enabled a programme of on-going improvements since 2002, the most recent grant being in 2007 from the Awards for All scheme for £6,940.[19][20]

Winsford is also well known for its crown green bowlers, with many of the top players in the country hailing from Winsford over the years, many of whom played or play for Wharton Cons BC.

Winsford Flash Sailing Club sails on Bottom Flash, the largest of the town's three flashes.[21] The club was founded (originally as Northwich Sailing Club) in 1931 and moved to Winsford in 1934.[22]