Carrickfergus is a large town in County Antrim, standing on the north shore of Belfast Lough. It is County Antrim's oldest town and takes its name from Fergus Mór mac Eirc, the 6th century king of Dál Riata.

As an urban settlement, Carrickfergus predates Belfast and was for several centuries both larger and more prominent. Belfast Lough itself was called 'Carrickfergus Bay' well into the 17th century. Carrickfergus and the surrounding area was, for a time, administered separately from the rest of County Antrim as a county corporate.

Carrickfergus is now a centre for leisure sailing, and is home to Carrickfergus Marina and Carrickfergus Sailing Club. The town is part of the Greater Belfast conurbation, lying 11 miles from Belfast city centre. 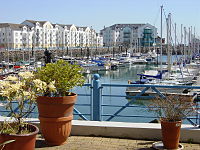 Carrickfergus is the oldest town in Ulster, with many centuries of history within its stones.

The historical walled town originally occupied the area now forming the town centre, bordered by Albert Road to the west and Joymount in the east. Segments of the town wall are still visible in various parts of the town and in various states of preservation. Archaeological excavations close to the walls' foundations have yielded many artefacts that have helped historians piece together a picture of the lives of the 12th and 13th century inhabitants.[1]

In the 6th century, Fergus, the son of Eric of Armoy, left the province of Ulster to form a kingdom in Scotland. On returning to Ulster some time afterwards, he was drowned at sea when his ship ran aground on a volcanic dyke by the shore. The place became loosely known as "Carraig Fhearghais" – the rock of Fergus.[1]

Carrickfergus became an inhabited town shortly after 1170, when Anglo-Norman knight John de Courcy invaded Ulster, established his headquarters in the area and built Carrickfergus Castle on the "rock of Fergus" in 1177.[2] The castle, which is the most prominent landmark of Carrickfergus, is widely known as one of the best-preserved Norman castles in Ireland.

At some time between 1203 and 1205, De Courcy was expelled from Ulster by Hugh de Lacy, authorised by King John and it was de Lacy who oversaw the final construction of the castle, which included the gatehouse, drum towers and outer ward. It was at this time that he established the nearby St Nicholas' Church. De Lacy was relieved of his command of the town in 1210, when King John himself arrived and placed the castle under royal authority. De Lacy eventually regained his title of Earl of Ulster in 1227, but the castle and its walled town were captured several more times following his death (in 1242) and the town largely destroyed by the Scots in 1402.[1][2]

In November 1597 the Battle of Carrickfergus was fought in and around the town, part of the Nine Years' War, between the crown forces of Queen Elizabeth I and the Scots MacDonnell clan. The English were defeated.

Sir Arthur Chichester was appointed by the Earl of Essex to govern the castle and town in 1599 and was responsible for the plantation of English and Scottish peoples in the town, as well as the building of the town wall.[3]

In 1637 the Surveyor General of Customs issued a report compiled from accounts of customs due from each port and their "subsidiary creeks". Of the Ulster ports on the list, Carrickfergus was first, followed by Bangor, Donaghadee, and Strangford.[4] In the same year the town sold its customs rights - which ran from Groomsport in County Down up to Larne in County Antrim - to Belfast and this in part led to its decline in importance as the province of Ulster grew.

Though decaying, in 1689 the castle withstood several days of siege by the forces of William of Orange before surrendering on 28 August. William himself subsequently landed at Carrickfergus on 14 June 1690. During the Seven Years' War, in February 1760, the whole town was briefly captured and held to ransom by French troops landed from Francois Thurot's naval squadron, after the defenders ran out of ammunition. Thurot was caught at sea by the Royal Navy and killed in action off the Isle of Man.

In April 1778, during the American Revolutionary War, John Paul Jones, in command of the American ship Ranger, attempted to capture a British Royal Navy sloop of war, HMS Drake, moored at Carrickfergus. Having failed, he returned a few days later and challenged Drake to a fight out in the North Channel which the Americans won decisively.

In 1912 the people of Carrickfergus turned out in their thousands to watch as the RMS Titanic made its first ever journey up the lough from its construction dock in Belfast. The famous passenger liner was anchored overnight just off the coast of Carrickfergus, before continuing on its journey.[5]

During Second World War, Northern Ireland was an important military base for United States Naval and Air Operations and a training ground for American G.I.s. The First Battalions of the elite US Rangers were activated and based in Carrickfergus for their initial training. The US Rangers Centre in nearby Boneybefore pays homage to this period in history.[5] 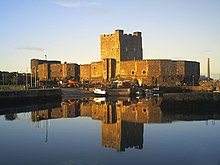 In the 1970s, the town became an important centre for the textile industry. An ICI man-made fibre factory was opened at Kilroot and was followed by the Rothman's cigarette factory. Courtaulds operated a large rayon works there until the 1980s.