The Windsor Bridge or Windsor Town Bridge, an iron and granite arch bridge over the River Thames, is located between the towns of Windsor in Berkshire and Eton in Buckinghamshire. The bridge carries pedestrian and cycle traffic, and crosses the Thames just above Romney Lock. It is a Grade II listed building. [1]

It is likely that the first bridge on this site was built in the 12th century AD. By 1172 it is recorded that Osbert de Bray derived over £4 from tolls levied on vessels passing beneath the bridge. In 1242, permission was granted for oak trees to be felled in Windsor Forest for the purpose of constructing a new bridge between Windsor and Eton. By 1819 the wooden bridge, presumably rebuilt many times over its life, had deteriorated and it was decided to build a new bridge in new materials. 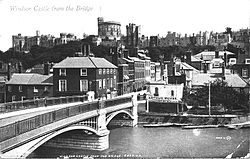 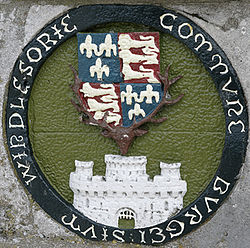 Construction on the current bridge was started in 1822 and it opened on 1 June 1824. The bridge has three arches, each comprising seven cast iron segments, and supported in mid-stream by two granite piers.

Built as a road bridge, tolls were originally levied on traffic crossing the bridge. Following protests and a case, The Mayor &c. of New Windsor and ano. v Joseph Taylor which went to the Appellate Committee of the House of Lords, these tolls were scrapped in 1897. In the 20th century the bridge carried the A332, the busy main road between Slough and Windsor.

In 1970, cracks were discovered in some of the cast iron segments, and despite local protests, however with almost equal support it was decided to close the bridge to all motorised traffic. All such traffic must now travel between Windsor and Eton via the Queen Elizabeth Bridge on Windsor's bypass ¼ mile to the west or for those approaching from Old Windsor or Runnymede the Albert Bridge provides an alternative route via Datchet's High Street.

In 2002 the bridge was refurbished, with repairs to the structure and new parapets including integral lighting. The bridge deck was replaced using Yorkstone and seating areas provided. The bridge remains in use by non-motorised traffic only and provides an excellent walking route from central Windsor to Eton's High Street, and a good viewing spot for both the river and Windsor Castle.

Approximately 80 yards south-east of the bridge is Windsor and Eton Riverside railway station and the town's other station, Windsor and Eton Central railway station is 200 yards to the south-west. The destinations are London Waterloo and London Paddington respectively, the former being far closer to the average centre point, Charing Cross. The Central Station offers the "change-at-Slough" service to London of between 41–56 minutes compared to a no-change-required 56–78 minutes for the riverside station.