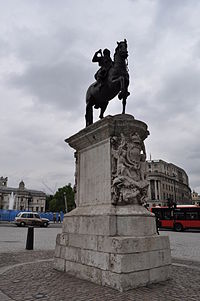 Charing Cross Roundabout, showing the Statue of Charles I, situated on the site of the original Eleanor Cross

Charing Cross denotes the geographical centre point of the metropolis. It is located at the junction of Strand, Whitehall and Cockspur Street, just south of Trafalgar Square. It is the point from which distances to London are measured. It gives its name to several landmarks, including Charing Cross railway station, one of the main London rail terminals.

Charing Cross is named after the Eleanor cross that stood on the site, in what was once the hamlet of Charing. The site of the cross has been occupied since 1675 by an equestrian statue of King Charles I. A loose Victorian replica of the mediæval cross, the Queen Eleanor Memorial Cross, was erected a short distance to the east outside the railway station.

Whereon her statue shall with glory shine;

And henceforth see you call it Charing Cross." George Peele The Famous Chronicle of King Edward the First (1593)

The name of the area, Charing, is derived from the Old English word "cierring", referring to a bend in the River Thames.[1][2]

The addition of the name "Cross" to the hamlet's name originates from the Eleanor cross erected in 1291–94 by King Edward I as a memorial to his wife, Eleanor of Castile, and placed between the former hamlet of Charing and the entrance to the Royal Mews of the Palace of Whitehall (today the top of Whitehall on the south side of Trafalgar Square). Folk etymology suggests the name derives from chère reine — "dear queen" in French — but the original name pre-dates Eleanor's death by at least a hundred years.[3]

This wooden sculpted cross was the work of the mediæval sculptor, Alexander of Abingdon,.[4] It was destroyed in 1647 on the orders of Parliament during the Civil War.[5] A 70-ft-high stone sculpture in front of Charing Cross railway station is a copy of the original cross. Erected in 1865, it is situated a few hundred yards to the east of the original cross, on the Strand. It was designed by the architect E.M.Barry and carved by Thomas Earp of Lambeth out of Portland stone, Mansfield stone (a fine sandstone) and Aberdeen granite. It is not a faithful replica, being more ornate than the original.

A variation on the name appears to be "Charygcrouche", near St Martin in the Fields, in 1396. [6]

Since 1675 the site of the cross has been occupied by a statue of King Charles I mounted on a horse. The site is recognised by modern convention as the centre of London for the purpose of indicating distances by road in favour of other measurement points (such as St Paul's Cathedral which remains as the root of the Great Britain road numbering scheme). Charing Cross is marked on modern maps as a road junction, and as a postal address denoting the corner of Northumberland Avenue and Whitehall. It previously extended as far as Great Scotland Yard.

Official use as central point

Since the second half of the 18th century Charing Cross, has been used as a reference to the centre of the metropolitan London area as contrasted to the City of London to the east, although the terms 'west end' and 'east end' take as their central referents the City.[7] From the early 19th century, legislation applicable only to the metropolis used Charing Cross as a central point to define its geographical scope. Its later use in legislation waned in favour of providing a schedule of local government areas.