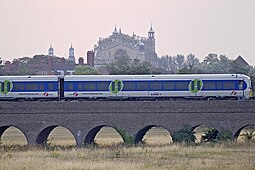 Windsor Railway Bridge is a wrought iron 'bow and string' bridge near Windsor, designed by Isambard Kingdom Brunel. It carries the ex-Great Western Railway branch line from Slough to into Windsor and Eton Central station. It crosses the River Thames, which here forms the border between Buckinghamshire and Berkshire, on the reach between Romney Lock and Boveney Lock.

The bridge is a single-span structure comprising three bowstring trusses which created two bays for the original two GWR tracks.[2] The bridge is the World's oldest wrought iron railway bridge still in regular service,[3] and is a forerunner of Brunel's final masterpiece, the Royal Albert Bridge, Saltash.[1] The bridge was Grade-II* listed in 1975.[1]

The line opened in 1849. The construction of the line was delayed and could not be included in the original Parliamentary Act because of objections from the Provost of Eton College. The brick viaduct was constructed between 1861-65 to replace the original wooden trestle viaduct. The bridge contractor was Mr George Hannet.

Although the bridge was built to take two tracks, the track on the upstream side was removed when the line was rationalised in the 1960s. The trackbed on this side now carries a sewage or water main pipe.