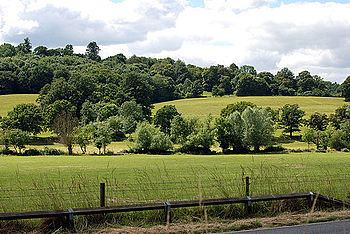 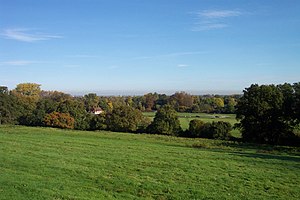 Runnymede from the Kennedy Memorial

Runnymede from south-east of the National Trust land

Runnymede is a water-meadow alongside the River Thames in Surrey, famous as the place where King John and the rebel barons sealed Magna Carta in June 1215. Because of its historic significance in the establishment of Magna Carta and the freedoms it represents, much of the meadow was bought by Sir Urban Broughton MP for its preservation, and presented to the National Trust by his widow in 1929.

The meadow is on the south bank of the Thames, in the very north-west of Surrey, adjacent to the border with Buckinghamshire and close to that of Berkshire. Its proximity to Windsor Castle in the latter county is what brought King John and the barons here to reach their settlement.

The meadow contains several monuments; to Magna Carta, to the Commonwealth Air Forces and to the late American President John F Kennedy. The size of the land is enough that the monuments do not intrude.

The name Runnymede refers to land in public and National Trust ownership in the Thames flood plain south-west of the river between Old Windsor and Egham. The area includes (to the west of A308 road) the Long Mede and Runnymede, which together with Coopers Hill Slopes is managed by the National Trust. There is also a narrower strip of land, east of the road and west of the river, known as the Yard Mede. Slightly further downstream from the area shown on the map are (inter alia): a recreational area with a car park; a number of private homes; a large distribution centre; and a hotel.

The landscape of Runnymede is characterised as 'Thames Basin Lowland', urban fringe. It is a gently undulating vale of small fields interspersed by woods, shaws, ponds, meadows, and heath.[1] The National Trust area is a Site of Nature Conservation Interest (SNCI) which contains a Site of Special Scientific Interest. Both sites are overseen by Runnymede Borough Council.[1]

Long Mede is a meadow north of the ancient 'mede' of Runnymede towards Old Windsor and has been used for centuries to provide good-quality hay from the alluvial pasture. Runnymede itself lies towards Egham and is associated popularly with Magna Carta Island, although they are located on opposite banks of the Thames.

Near the Island, on the north-east flood plain, in parkland on the eastern bank of the river, are Ankerwycke and the ruins of the 12th century Priory of St Mary's. The Thames has changed course here occasionally, and these areas may once have been an integral part of Runnymede. Both were acquired by the National Trust in 1998.

Runnymede's historical significance has been heavily influenced by its proximity to the Roman road river crossing at nearby Staines-upon-Thames.

The name Runnymede is derived from Old English, but its meaning is not settled. The suffix ieg though means "island" and a "mede" (or 'mead' in modern spelling) is a meadow.

The water-meadow at Runnymede is the place at which, in 1215, King John sealed the Magna Carta: the text of the charter states that it was made at Runnymede: "Given under our hand - the above named and many others being witnesses - in the meadow which is called Runnymede, between Windsor and Staines, on the fifteenth day of June, in the seventeenth year of our reign.". Magna Carta is seen as the first limitation on the king's power since the Norman Conquest, and thus a precursor to the development of constitutional law. Runnymede's association with ideals of democracy, limitation of power, equality and freedom under law has attracted placement there of monuments and commemorative symbols.

The last fatal duel in Britain took place in 1852, between two Frenchmen. It took place on Priest Hill by Windsor Great Park.

The National Trust land was donated in 1929 by Cara Rogers Broughton and her two sons. The American-born widow of Urban Hanlon Broughton, she was permitted by letter from George V to join her son's new peerage in tribute to her husband and this gift and be officially styled Lady Fairhaven. The gift was given in memory of Urban Broughton. At the time the New Bedford Standard-Times commented "It must be a source of gratification to all Americans, and especially to us here and in Fairhaven, that the presentation of this historic spot as public ground has been brought about by an American woman, an appropriate enough circumstance considering that the great charter underlies the USA's conception of government and human rights."[2]

After the death of Urban Broughton in 1929, Sir Edwin Lutyens was commissioned to design a set of twin memorials consisting of large kiosks and posts or "piers" with stone blocks crowned with laurel wreaths and formalised urns at the Egham end and with lodges and piers at the Windsor end. Lutyens also designed a low wide arch bridge to carry the main road over the Thames to the north, integrating the road layout and bridge design into his plans for the memorials. The southern kiosks were moved to their present location when the M25 motorway was constructed.[3]

There are two octagonal kiosks with piers facing each other across the A308 towards Egham. These piers are a shorter version of those adjacent to the lodges either side of the same road towards Old Windsor in the Long Mede. The lodges show typical Lutyens design features with steeply angled roofs, large false chimneys and no rainwater gutters at the eaves.

The piers carry similar inscriptions. On one face is the inscription:

and on the other the words:

The memorials were opened in 1932 by the Prince of Wales (Edward VIII) and are Grade II listed buildings.[4]

Langham Pond was created when the meandering River Thames formed an oxbow lake. Its status as a wetland Site of Special Scientific Interest was first notified in 1975 and later reviewed under Section 28 of the Wildlife and Countryside Act 1981 when the protected area was extended to 64 acres within Runnymede as managed by the National Trust.[5]

The pond and associated meadow form a habitat considered unique in Southern England and of international importance for nature conservation. The flora and fauna include nationally scarce plants and insects including a species of fly unrecorded elsewhere in the United Kingdom.

The Air Forces Memorial commemorates the men and women of the Allied Air Forces who died during the Second World War and records the names of the 20,456 airmen who have no known grave.

From the top of the tower visitors can see long views over Windsor, the surrounding counties and aircraft taking off and landing at Heathrow. On a good day visitors can see as far as the Wembley Arch and even the 'Gherkin' in the City of London. The memorial was designed by Sir Edward Maufe, architect of Guildford Cathedral.

The British memorial for the American President John F Kennedy was jointly dedicated in May 1965, by Queen Elizabeth II and Jacqueline Kennedy, prior to a reception for the Kennedy family at Windsor Castle. The memorial consists of a garden and Portland stone memorial tablet inscribed with the famous quote from his Inaugural Address:[6]

Visitors reach the memorial by treading a steep path of irregular granite steps, intended to symbolise a pilgrimage. There are 50 steps in total. Each step is different from all others, with the entire flight made from 60,000 hand-cut granite setts.[6] Landscape architect Geoffrey Jellicoe designed the garden;[7] sculptor Alan Collins designed and carved the stone inscription.[8]

The area of ground on which the memorial is situated was given as a gift to the United States of America by Act of Parliament (in terms of property ownership; the area remains under the sovereignty of the United Kingdom).[9]) The memorial is maintained by the Kennedy Memorial Trust, which also sponsors educational scholarships for British students to attend university in the United States.

The Magna Carta Memorial & view towards the 'medes'

Situated in a grassed enclosure on the lower slopes of Cooper's Hill, the Magna Carta Memorial memorial is of a domed classical style, containing a pillar of British granite on which is inscribed "To commemorate Magna Carta, symbol of Freedom Under Law". The memorial was created by the American Bar Association (ABA) to a design by Sir Edward Maufe RA, and was unveiled on 18 July 1957 at a ceremony attended by American and English lawyers.[6]

Since 1957 representatives of the ABA have visited and rededicated the Memorial, renewing pledges to the Great Charter. In 1971 and 1985 commemorative stones were placed on the Memorial plinth.

A large house on Cooper's Hill, overlooking Runnymede and the River Thames, has played a number of roles – as the Royal Indian Engineering College; wartime Post Office headquarters; storage for the Statue of Eros during World War II; an emergency teacher training college; Shoreditch College – a centre for craft and handiwork education – and most recently, Brunel University's design school (has removed to Uxbridge Main Campus). 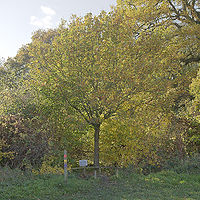 The Duke of Gloucester planted an oak tree adjacent to the Magna Carta Memorial in 1987, as did P V Narismha Rao, Prime Minister of the Republic of India. The Prime Minister left a plaque reading "As a tribute to the historic Magna Carta, a source of inspiration throughout the world, and as an affirmation of the values of Freedom, Democracy and the Rule of Law which the People of India cherish and have enshrined in their Constitution. March 16, 1994".

In 1987 two further oak trees were planted near the Memorial. One, planted by Her Majesty Queen Elizabeth II, marked National Tree Week. Another,planted by John O. Marsh, Secretary of the Army of the USA, has a plaque which reads: "This oak tree, planted with soil from Jamestown, Virginia, the first permanent English settlement in the New World, commemorates the bicentenary of the Constitution of the United States of America. It stands in acknowledgement that the ideals of liberty and justice embodied in the Constitution trace their lineage through institutions of English law to the Magna Carta, sealed at Runnymede on June 15th, 1215."

The Ankerwycke Yew is over 1,400 years old[11] and stands on the left bank of the river. Some have asserted it as a possible site for Magna Carta to have been sealed: however this would have required the barons and the king to have crossed the river, for no apparent reason.

Land development proposals threatening the yew led to action resulting in the tree and surrounding estate passing into the protection of the National Trust in 1998.

In 1992, botanist and environmental campaigner David Bellamy led a dedication at the yew, stating:

There followed ten pledges to sustain all life forms.[6]

Runnymede is owned by the National Trust and is open to the public all the time at no charge.

Runnymede is accessed via the road or river towpath on foot or by bicycle, or by road on the A308 road near Egham, about four miles south-east of Windsor. Two car parks (on the A308) adjoin the Windsor entrance (these may be closed in winter due to flooding etc.). Runnymede is also along the Thames Path National Trail. The nearest railway station is Egham.

One of the Lutyens lodges at the Windsor entrance to the meadow houses a popular tea room.

The Anckerwycke area on the other bank of the river is accessible from the B376 between Wraysbury and Staines (nearest station Wraysbury).