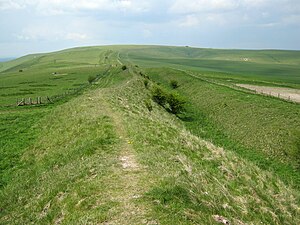 The Wansdyke on Tan Hill, Wiltshire

Wansdyke is a series of early mediæval defensive linear earthworks in Wiltshire and Somerset, consisting of a ditch and a running embankment from the ditch spoil, with the ditching facing north. There are two main parts: an eastern dyke which runs between the Savernake Forest and Morgan's Hill in Wiltshire, and a western dyke which runs from Monkton Combe to the ancient hill fort of Maes Knoll in Somerset. Between these two dykes there is a middle section formed by the remains of the London to Bath Roman road. There is also some evidence in charters that it extended west from Maes Knoll to the coast of the Severn Estuary but this is uncertain. It may possibly define a post-Roman boundary.

The name of the work is from the Old English Wodnesdic ("Woden's Dyke").

Wansdyke consists of two sections of 9 and 12 miles long with some gaps in between:

The middle section, 14 miles long, is sometimes referred to as 'Mid Wansdyke', but is formed by the remains of the London to Bath Roman road. It used to be thought that these sections were all part of one continuous undertaking, especially during the Middle Ages when the pagan name Wansdyke was applied to all three parts, which idea more recent scholars approve.

East Wansdyke in Wiltshire, on the south of the Marlborough Downs, has been less disturbed by later agriculture and building and remains more clearly traceable on the ground than the western part. Here the bank is up to 13 feet high with a ditch up to 8 feet deep.

Wansdyke's origins are unclear, but archaeological data shows that the eastern part was probably built during the 5th or 6th century, which is after the withdrawal of the Romans and before the takeover by incoming English. The ditch is on the north side, so presumably it was used by the Britons as a defence against Saxons encroaching from the upper Thames Valley westward into what is now the West Country.

Lieutenant-General Augustus Pitt Rivers carried out excavations at the Wansdyke in Wiltshire in the late 19th century, considering it the remains of a great war in which the southwest was being defended.[1] In 1958, Fox and Fox attributed its construction to the pagan Saxons, probably in the late sixth century.[2] Its relationship to the expansion of the West Saxons was considered in 1964 by J.N.L. Myres, who maintained to the end a minority opinion that Wansdyke was constructed by some authority in sub-Roman Britain.[3]

Although the antiquarians like John Collinson [4] considered West Wansdyke to stretch from south east of Bath to the west of Maes Knoll,[5] a review in 1960 considered that there was no evidence of its existence to the west of Maes Knoll.[2] Keith Gardner refuted this with newly discovered documentary evidence.[6] In 2007 a series of sections were dug across the earthwork which showed that it had existed where there are no longer visible surface remains.[7] It was shown that the earthwork had a consistent design, with stone or timber revetment.

There is little dating evidence but the work is consistent with either a late Roman or post-Roman date. On the other hand, as there is little archaeological evidence to date the western Wansdyke, it may have marked a division between British kingdoms or have been a boundary between the Britons and the Saxons.

The evidence for its western extension is earthworks along the north side of Dundry Hill, its mention in a charter and a road name.[8]

The area of the western Wansdyke became the border between the Britons and the West Saxons following the Battle of Dyrham in 577.[9] According to the Anglo-Saxon Chronicle, King Cenwalh achieved a breakthrough against the Britons with victories at Bradford on Avon (in the Avon Gap in the Wansdyke) in 652 AD,[10] and further south at the Battle of Peonnum (at Penselwood) in 658 AD,[11] followed by an advance west through the Polden Hills to the River Parrett.[12]

The Saxons named the dyke after their god Woden, hence it became 'Woden's Dyke' and, eventually, Wansdyke. Its name occurs in charters of the 9th and 10th century AD. It may be compared to both Offa's Dyke (a much later work forming a Mercian border with Wales) and Hadrian's Wall (the Roman boundary wall in northern Britannia) as one of the largest defensive earthworks in the United Kingdom. Nennius, an 8th century Welsh monk who had access to older chronicles since lost, describes these defences and their purpose, and links them to the legends of King Arthur.[13]

Route and points of interest