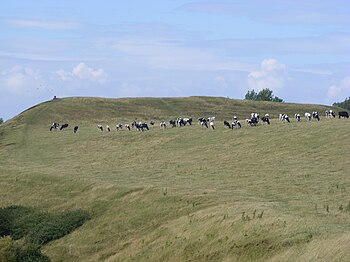 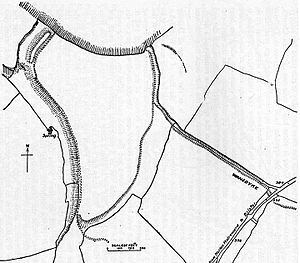 Plan of the site

Maes Knoll (sometimes Maes tump or Maes Knoll tump) is an Iron Age hill fort in Somerset, located at the eastern end of the Dundry Down ridge, south of the city of Bristol and north of the village of Norton Malreward near the eastern side of Dundry Hill. It is a Scheduled Ancient Monument.[1]

The hill fort, which is approximately 390 x 84 ft, and 45 ft in height, covering 20 acres, consists of a fairly large flat open area, roughly triangular in shape, that has been fortified by ramparts and shaping of the steep-sided hilltop around the northern, eastern and south-western sides of the hill. It rises to an altitude of 646 ft above sea level,[2] and provides views over the lands it would have once commanded. From here, there are clear views north to Bristol, east to Bath and the Cotswold Hills, and south over Stanton Drew stone circles to Chew Valley Lake and the Mendip Hills. The underlying rocks are Inferior Oolite of the Jurassic period.[2]

It is believed to have been built, around 250 BC, by the Dobuni who were one of the Celtic tribes living in the British Isles prior to the Roman invasion of Britain. The name Maes Knoll is derived from the old English word Maerc meaning boundary.[3] The existing scarp slopes were steepened and, on the north-western edge of the fort is an earthen mound, known as Maes Knoll Tump, about 24 ft 6 in above the rests of the fort defences, which is 200 ft across and 50 ft above a defensive ditch.[3][4]

The later Wansdyke runs west from it along the north side of Dundry Hill and south-east from it.

During the Second World War, a draughty, rectangular, corrugated-iron hut on the top of the tump sheltered Dundry Home Guard soldiers, allowing them to watch for enemy aircraft and potential parachute or glider invasions of Bristol. The flat plateau immediately to the east of Maes Knoll tump had perhaps 50 stone cairns to deter enemy glider landings.