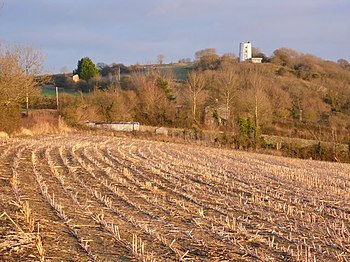 Farmland on the Polden Hills

The Polden Hills in Somerset are a long, low ridge, extending for 10 miles through the Somerset Levels, separating the Levels into two parts. They run nearly parallel with the Mendip Hills to the north, beyond the levels, but are nowhere near the height of the latter.

This thin line of higher ground has since man first set foot in this land provided the only dry route across the marshlands of the Somerset Levels, and consequently it is an ancient route – the modern day road follows a Roman road, which would have lain over a more ancient trackway still.

The hills reach nearly to the sea at Bridgwater Bay, though cut through at this western end by the M5 motorway and a railway. 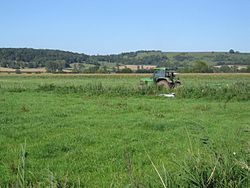 The hills rise behind the Levels

The hills stretch from Puriton, near Bridgwater, in the west, to Street, in the east. The ridge of the hill once accommodated a Roman road, from Ilchester to the port of Combwich. Roman remains from the "Polden Hill Hoard" are now in the British Museum.[1]

The Roman road crossed the River Parrett by means of a ford, at the White House (White House Rhyne), on the Pawlett Hams. This western extension forms part of an Anglo-Saxon route. The river crossing could only be used a few hours a day at low tide and was used by Samuel Taylor Coleridge in the 1790s when he stayed at Nether Stowey, to travel to and from Bristol. It went out of use as other roads were improved and the White House, a former public house, is now just a ruin. The modern road, now the A39, is carried on a causeway from the King's Sedgemoor Drain, at Bawdrip, to Bridgwater.

The Poldens are a low narrow ridge of Blue Lias with alternating bands of limestone and clay. Blue Lias is believed to have been quarried on the Polden Hills in the 15th century; and was quarried in Puriton from the early 19th century until the 1973, when the local cement works closed.[2]

Great Breach and Copley Woods near Compton Dundon is a Nature Conservation Review Woodland Site, owned and managed by the Somerset Wildlife Trust. It has been designated as a biological Site of Special Scientific Interest because of the invertebrate population.[3] 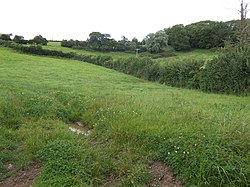 Landscape on the Polden Hills

The former mediæval planned town of Caput Montis was located at the western end of the Polden Hills. Caput Montis failed as a planned town and now exists as the earth works of a Motte and Bailey in the hamlet of Downend, now a detached part of the village of Puriton.

There was also at Dunball a railway Halt, a Hotel, a Post Office and a Wharf - part of the Port of Bridgwater.

There are a number of small villages situated on both slopes of the ridge, many of which are named in the Domesday Book. Most of the eastern villages, from Street to Cossington, and possibly Woolavington, (which are also parishes) are located in mediæval planned-parishes. They once formed parts of the estates of Glastonbury Abbey.

Villages of the Polden Hills (west to east)