Monkton Combe is a village and parish in the Bath Forum Hundred of Somerset, three miles south of Bath itself. The parish, which includes the hamlet of Tucking Mill, had a population of 554 in 2013.[1] It has also been called Monckton Combe and Combe Monckton/Monkton.

According to Rev. John Collinson in his History of Somerset (1791), the village's original name was Combe, with the Monkton element being attached as an adjective to differentiate it from neighbouring Combe Down and Combe Grove. The village was originally owned by the monks of Bath Abbey, hence Monkton Combe.

It was on the route of the (now disused) Somersetshire Coal Canal, which ran parallel to Midford Brook.

Monkton Combe railway station featured in the 1953 film The Titfield Thunderbolt, one of the Ealing comedies. The film's plot centred on efforts by villagers to preserve their local railway line. It was on the short-lived branch line of the Bristol and North Somerset Railway which went from Limpley Stoke to Camerton and had closed to passenger traffic in 1925, though the line was used for freight traffic from the Somerset coalfield until 1952.

The parish church of St Michael, thought to have been Norman, was razed in the early 19th century and rebuilt in 1814. The 1814 church was soon found to be too small, and was rebuilt in 1865 at the initiative of the first Vicar of Monkton Combe, the Rev. Francis Pocock. It was designed by ecclesiastical architect C. E. Giles of London, and the builder was Mr. S. G. Mitchell. It was extended within just a few years to accommodate the growing number of pupils from nearby Monkton Combe School, founded by Rev. Pocock in 1868. The church is a Grade-II listed building.[2]

The churchyard contains the grave of Harry Patch, the last surviving British soldier who served in the First World War, and a handful of Commonwealth War Graves. 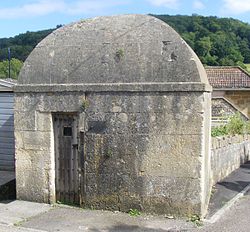 The village has one public house, the Wheelwrights Arms, which was built as a private house in the mid-late 18th century.[3]

There are two mills, neither of which is in working order. The Old Mill (a former flock mill) was built in the early-mid 19th century.[4]

A village lock-up was built in the 18th century, probably circa 1776. This is now a Grade-II listed building[5] and an Ancient monument.

A significant proportion of properties in the village are now owned and occupied by Monkton Combe School, an independent Christian boarding and day school in the public school tradition which was founded in 1868 by the first Vicar of Monkton Combe, Revd. Francis Pocock.