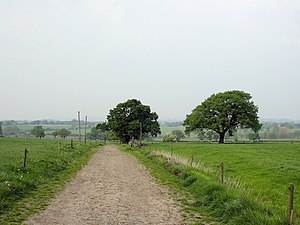 The Two Saints Way is a long-distance walking route between the two cathedral cities of Chester in Cheshire and Lichfield in Staffordshire, covering a distance of 92 miles.

The conceit of the route is that it recreates a mediæval pilgrimage route between the two cities. The two saints who give the route its name are St Werburgh (whose shrine was in Chester) and St Chad (Lichfield).

The route partly follows the Heart of England Way and is waymarked for about 95% of the way.

Starting at Chester Cathedral and passing by the Roman amphitheatre and the pilgrim church of St John's, the route predominantly follows the Shropshire Union Canal with diversions to Christleton, Beeston Castle, Bunbury village and St Mary's Church in Acton, and is relatively flat. This section ends at St Mary's Church in the market town of Nantwich.

Farmland predominates in this section and the route becomes hillier. The route passes the Englesea Brook Chapel and Museum of Primitive Methodism[1] and the village of Barthomley before reaching Stoke-on-Trent.

The halfway point of the trail is Stoke Minster, which has a Anglo-Saxon preaching cross.

The route follows the Trent Valley along sections of the Trent and Mersey Canal and remnants of the Staffordshire New Forest at Trentham and Tittensor Chase. It passes through the market town of Stone and the village of Burston to Salt, where it turns south west over Hopton Heath and Beacon Hill to reach St Chad's, the oldest church in the county town of Stafford.

The route follows the River Sow out of Stafford and then joins the Heart of England Way at Milford to cross Cannock Chase, an Area of Outstanding Natural Beauty. The route passes the Katyn Memorial, the Cannock Chase Visitor Centre and Castle Ring hill fort. The route then runs through farmland, passing the Cross in Hand Lane, to reach Lichfield and the pilgrim sites at Lichfield Cathedral and St Chad's Well.