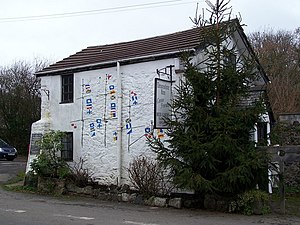 The Trafalgar Way is a conceptual long-distance route, now marked with plaques, from Falmouth in Cornwall to London in Middlesex, following the route taken by which Lieutenant Lapenotiere of HMS Pickle to carry dispatches with the news of the Battle of Trafalgar. Lapenotiere landed at Falmouth on 4 November 1805 after a hard voyage in bad weather. He then raced to London bearing the dispatches containing the momentous news of Lord Nelson's victory and death in the Battle of Trafalgar on 21 October 1805.

Following the death in action of the Commander in Chief, Admiral Lord Nelson, command of the fleet passed to his deputy, Vice Admiral Cuthbert Collingwood. Collingwood's ship, the Royal Sovereign, had been dismasted in close fighting in the battle, so Collingwood transferred his flag to HMS Euryalus, but the end of the battle was the beginning of a severe storm in the waters off Cadiz, which blew for several days and the victorious but battered fleet was in danger, which kept the Admiral occupied. Nevertheless, naval dispatches must be sent to the Admiralty.

First news of the battle

The first dispatch reporting the outcome of the battle was written by Collingwood the day after the battle, 22 October 1805, and entrusted to Lieutenant John Richards Lapenotiere, captain of H M Schooner Pickle, but his departure was delayed by the storm until Saturday 26 October. By this time a second dispatch has been added, dated 24 October, describing the effects of the storm on the ships that had survived. He also carried copies of two General Orders addressed to the Fleet.

The Pickle reached Falmouth on Monday 4 November and Lapenotiere then travelled overland to London. He rode “express in a post chaise and four.” Edited versions of Collingwood’s four documents that Lapenotiere delivered were published in The London Gazette on 6 November and subsequently in most papers. The first report contained the words “I fear the numbers that have fallen will be found very great, when the returns come to me; but it having blown a gale of wind ever since the action, I have not yet had it in my power to collect any reports from the ships”. This news triggered understandable anxiety, particularly amongst the families of the 18,465 men who had been with Nelson at Trafalgar, to learn the details of the casualty lists, or “butcher’s bill” as they were commonly known.

Lapenotiere's journey was about 271 miles, taking 37 hours and costing £46. There were 21 stops to change horses on the way from Falmouth to London and his “account of expenses”, which was carefully saved for posterity in Admiralty records, shows his route, where he changed horses and his costs. The route he took was the main Falmouth to London coaching road of 1805 so each stage was between 10 and 15 miles at a speed of just over 7 mph. The expenses involved for each leg were:-

To date no record has been found to show exactly where he obtained fresh horses, although in some of the smaller places there was probably only one stable or coaching inn available.

Commander John Sykes of the 18-gun sloop HMS Nautilus had been ordered by Nelson to patrol off Cape St Vincent in southwest Portugal. He met the Pickle as she sped homewards on 28 October and, having heard Lapenotiere’s news of the battle, he appears to have elected to abandon his ordered station and escort the Pickle for her safety, but they lost sight of each other in very heavy weather. When Nautilus made Plymouth late on 4 November Sykes reported to Admiral William Young, who feared that Pickle might be missing.

As a precaution the Admiral therefore ordered Sykes to travel to the Admiralty to report the sketchy details of the battle that he had learnt from Lapenotiere at sea. As he reached Exeter, neither Lapenotiere nor Sykes were aware that they were now only a few miles apart on the same road in an involuntary race for London. Sykes reached the Admiralty at 2 a.m. on Wednesday 6 November, about an hour behind Lapenotiere.

By 28 October Collingwood had transferred his flag to the Euryalus and was able to send a second dispatch containing this information from some of the ships. Lieutenant Robert Benjamin Young, commanding the cutter Entreprenante (the smallest vessel present at the Battle of Trafalgar) took this dispatch to Faro on the Portuguese Algarve where it was handed to the British consul who delivered it to the British Embassy in Lisbon. From there it sailed on the 4th November aboard the next routine packet vessel, the Lord Walsingham which reached Falmouth on 13 November.

The mails she carried were taken by special carriage over the route followed by Lapenotiere and reached the Admiralty in London on Friday 15th. The casualty lists appeared in The Times on Monday 18th, thus ending the eleven days of anxiety for the families of the men of the Royal Sovereign, Mars, Dreadnought, Bellerophon, Minotaur, Ajax, Defiance, Leviathan, Defence and Revenge.

A third dispatch was written on 4 November, by which date order was being restored to the damaged British ships and Collingwood had shifted his flag from the frigate Euryalus to HMS Queen, a ship of the line of the Mediterranean squadron that had rejoined Collingwood after the battle. Considerable progress was also being made with the task of repatriating the Spanish prisoners to Spain. He was now able to dispatch the Euryalus to England with his third dispatch, and she sailed from off Cape Trafalgar on 7th with the captured French Commander in Chief, Admiral Pierre de Villeneuve, on board.

On Sunday 24 November, it was reported from Falmouth that “The hon. Capt. Blackwood landed here this evening, from his majesty's ship Euryalus, which he left off the Lizard this morning, and came up in his 8-oared cutter; he went off express for London immediately”.

Blackwood followed in the steps of Lapenotiere, reaching London late on 26th, and The Times of Thursday 28th carried Collingwood’s assessment of the condition and whereabouts of the ships of the defeated French and Spanish fleets, the prize list. The same dispatch also contained further casualty lists which now included first details from the Victory, Britannia, Temeraire, Prince, Neptune, Agamemnon, Spartiate, Africa, Bellisle, Colossus, Achille, Polyphemus and Swiftsure. The prize list reported that during the battle four French ships had “hauled to the Southward and escaped”, and their whereabouts were still unknown to Collingwood as he wrote his third dispatch.

The Admiralty, however, was not concerned because it had already received very satisfactory reports of the whereabouts of the escaped French ships from another messenger who rode into London from the West Country. On Saturday 9 November, the frigate Aeolus had sailed into Plymouth with the news that they had been taken as prizes by Captain Sir Richard Strachan]] off Cape Ortegal]] on Monday 4th.

The captain of the Aeolus, Lord Fitzroy, “set off with dispatches at 10 A.M. for the Admiralty, (the horses decorated with laurels) in a post-chaise and four”. The following day Captain Baker of the Phoenix arrived in Plymouth and took another chaise to London with further details of the Ortegal action, including the British casualty lists. The details carried by these officers were published in London on 11 and 12 November.

Although both Lord Fitzroy and Captain Baker travelled from Plymouth, they joined The Trafalgar Way at Exeter and followed it to London.

Collingwood’s fourth dispatch was his final news from Trafalgar, and it contained the casualty list from the Tonnant which was published in London on 4 December. It had not reached Collingwood until 9 November, when the Queen anchored off Cape Spartel after the departure of the Euryalus. The dispatch containing this report was sent to Lisbon and from there by the routine packet Townshend arriving at Falmouth on Friday 29 November. The mails she carried were taken up the same well-worn route to the Admiralty.

Lt Lapenotiere's 37-hour journey by post chaise and those of the other messengers that followed were commemorated by the inauguration of The Trafalgar Way and by the New Trafalgar Dispatch celebrations in 2005. Her Royal Highness the Princess Royal unveiled a plaque at Falmouth on 4 August 2005 to launch a series of events along the Way.

The Trafalgar Way is now marked by a series of commemorative plaques giving details of his journey and commemorating local people who fought with Nelson at Trafalgar. They can be seen at the following places, in which the locations in bold type show where Lieutenant Lapenotiere changed horses:

Other villages on the route such as Wilmington have erected similar plaques to record the passing of the messengers with the news and to commemorate their local men who fought alongside Lord Nelson at Trafalgar.