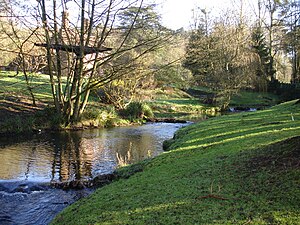 River Tillingbourne through the Albury Estate

The Tilling Bourne or the Tillingbourne or Tilling Brook is a little river in a fold in the hills in Surrey, along the south side of the North Downs. It joins the River Wey at Guildford.

The source of the bourne is near Tilling Springs to the north of Leith Hill at TQ143437 and it runs through a string of delightfully pretty villages; Friday Street, Abinger Hammer, Gomshall, Shere, Albury, Chilworth and Shalford.

The source is a semi-natural, uninhabited area. The river basin is on sandstone which has a low rate of weathering.[1] The Tilling Bourne is 11 miles in length.

The Tillingbourne initially flows northward for 2½ miles down the northern slopes of Leith Hill over a series of weirs and cascades, before turning west to run for 9 miles through Abinger Hammer and Chilworth towards the River Wey at Shalford.[2] The river is classified as a subsequent stream, since its course is determined by the direction of the stratum of softer rock for the majority of its length.

The river has four principal tributaries: the Friday Street stream joins at Wootton House; the Holmbury St Mary stream joins at Abinger Hammer; the Sherbourne Brook drains the Silent Pool and Sherbourne Pond and the Law Brook joins near Postford.[2]

The river used to power a number of gunpowder, paper and flour mills in the area.[3] The gunpowder mill was at Chilworth. Present day users include a trout farm, watercress beds,a business growing Phragmites|reeds and is often studied by students from nearby field studies centres, such as Sayers Croft and Juniper Hall[4].

The River Tillingbourne supports a healthy fish population of both wild brown trout and coarse fish. The Environment Agency has been working with local fishermen to improve the habitat for these fish by recreating a pool and riffle habitat and by cutting back overhanging vegetation.[5] 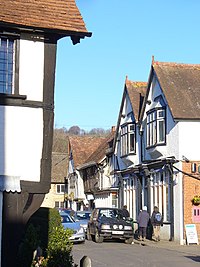 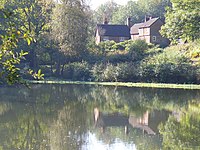 The Tillingbourne runs through an east-west valley provided for it by a modest fold in the hills, all in the green heart of rural Surrey. Through this valley runs the A25 (one of the few east-west routes in Surrey, though not a busy one), and along it several pretty villages.

Martin Tupper took the Tillingbourne Valley as the scene for a story which has echoed through the valley ever since. A poet and antiquarian from Albury and a best-selling writer in his own days, largely forgotten thereafter, Tupper wrote Stephan Langton - A Romance of the Silent Pool, largely set amongs these villages. He wrote that Stephen Langton, Archbishop of Canterbury, was born here (in Friday Street) and that near his own Arbury at the Silent Pool, Langton as a young priest saw King John chase a modest bathing maiden to her death. These and other places along the Tilling Brook appear in the pages of the novel, intended to make this part of Surrey "classic ground". Many a local history will unquestioningly repeat the assertion that Langton was born here, but the novel is a fiction.