Friday Street is a tiny hamlet on the lower slopes of Leith Hill in Surrey, a little up the lane and into the woods from Abinger. It is set well off the main roads around a hammer pond which served as a millpond to drive the hammers of the local iron industry but which has matured into a picturesque wooded village pond.

Friday Street is set in a steep, wooded valley, silent away from the main roads and isolated by its own wooded dell. It lies within the civil parish of Wotton but apart from that village, some way to the south of the A25 running under the scarp between Guildford to the west and Dorking to the east. Neighbouring villages include the Abingers of Abinger Hammer and Abinger Common as well as Wotton itself. 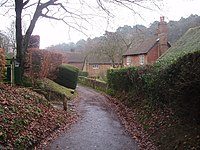 There are few houses in this tiny hamlet. By the pond is a historic inn that bears the name of Stephan Langton, Archbishop of Canterbury during the reign of King John and a signatory to Magna Carta.

In 1984 Friday Street was used as a location for the BBC Television series "The Tripods" based on the books by John Christopher, where, for the sake of the story it became the village of "Wherton."

Martin Tupper was a poet and antiquarian from Albury, distinguished in his own days as the author of a best-selling book of poetical philosophy and it was he who first associated Stephen Langton with Friday Street. In his novel Stephan Langton - A Romance of the Silent Pool, Tupper wrote that the Archbishop was born here and many a local history will unquestioningly repeat the assertion. The Silent Pool, where Langton as a young priest saw the King chase a modest bathing maiden to her death, is in nearby Albury and other towns along the Tilling Brook appear in the pages of the novel, intended to make this part of Surrey "classic ground".