Leith Hill is a hill in the Weald in Surrey. The Wealden hills lie south of the North Downs which dominate much of Surrey, but the Weald has precedence here, for Leith Hill reaches 965 feet above sea level, the highest point in Surrey; the county top. It is the topmost point too of the Greensand Ridge.

The hill is found north of the village of Ockley, the nearest town being Dorking, to the north-east. The Roman road Stane Street passes straight as an arrow from the Mole Gap over a lower spur of the hill and on through Ockley. On this spur is found an Iron Age camp, at Coldharbour. 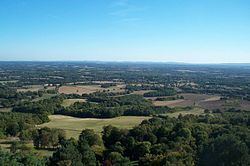 The hill is a popular climb. It is now owned by the National Trust.

A large number of public footpaths cross the hill which may be taken toward the summit. The closest village is Coldharbour or there is parking to the south of the hill on the Abinger Road for those who wish to challenge the fierce scarp slope.

A tower stands on the summit of Leith Hill, to which a story attaches. It was built in the 18th century by Richard Hull of nearby Leith Hill Place (once home to the composer Ralph Vaughan Williams). Hull noted that the hill was just 35 feet short of 1,000 feet and were it to achieve that height it could justly be termed a mountain. Therefore, in the years 1765-1766 he had the tower built to reach above the thousand-foot mark, and named it "Prospect House". Today it is known as the Leith Hill Tower.

Prospect House is a Gothic tower and consisted of two rooms neatly furnished, with a Latin inscription above the door announcing that it had been built for not only his own pleasure, but also for the enjoyment of others. Hull provided visitors with prospect glasses, similar to a small telescope, through which to survey the extensive views towards London and the English Channel, each some 25 miles away, and thirteen counties on a very clear day.

When Hull died in 1772, at his request he was buried under the tower. Soon after, the building was stripped of its contents, doors and windows, and fell into ruin. As a result, the tower was filled with rubble and concrete, and the entrance bricked up. In 1864, Mr Evelyn of nearby Wotton House decided to reopen it, but the concrete made this difficult, and so the additional turreted side-tower was added to allow access to the top of the tower.

The tower today stands 64 feet high, raising the total height of Leith Hill to 1,029 feet. At the top of the tower is a viewpoint indicator.

The tower was fully restored by the National Trust in 1984. This restoration included the removal of rubble and concrete, fitting safety features such as a handrail along the narrow staircase and converting the lower portion of the tower into a national trust shop. Leith Hill Tower is open to the public (weekends throughout the year, and Wednesdays and Fridays in summer), with a comprehensive display explaining the history of the tower and giving opinions and memories of local people.