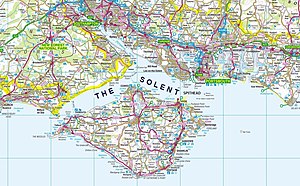 Map of the Solent and Isle of Wight, Hampshire

The Solent is the strait within Hampshire separating the Isle of Wight from the mainland of Great Britain.

The Solent is a major shipping route for passengers, freight and military vessels, as all ships entering Southampton Water or the ports of the Isle of Wight must navigate the Solent. It is an important recreational area for water sports, particularly yachting,[1] hosting the Cowes Week sailing event annually. It is sheltered by the Isle of Wight and has a very complex tidal pattern. Portsmouth lies on its shores. Spithead, an area off Gilkicker Point near Gosport, is known as the place where the Royal Navy is traditionally reviewed by the monarch of the day.

The waters and the coasts of the Solent are of great ecological and landscape importance, particularly because of the coastal and estuarine habitats along the edge of the Solent.[2] Much of its coastline is designated as a Special Area of Conservation.[3] It is bordered by and forms a part of the character of a number of nationally important protected landscapes including the New Forest National Park and the Isle of Wight AONB.

The name of the Solent is first recorded in 731 as Soluente. It is believed that Solent is "an ancient pre-English name of uncertain origin and meaning."[4]

Originally a river valley, the Solent has gradually widened and deepened for many thousands of years. The River Frome was the source of the River Solent, with three other rivers - the Rivers Avon, the Itchen and Test being tributaries of it.[5][6] Seismic sounding has shown that when the sea level was lower the River Solent incised its bed to a depth of at least 151 feet below current Ordnance Datum.[7] The Purbeck Ball Clay contains kaolinite and mica, showing that in the Lutetian stage of the Eocene water from a granite area, probably Dartmoor, flowed into the River Solent.

Seabed survey shows that when the sea level was lower in the Ice Age the River Solent continued the line of the eastern Solent (Spithead) to a point roughly due east of the east end of the Isle of Wight and due south of a point about two miles west of Selsey Bill, and then south-south-west for about 16 nautical miles, and then south for about 7½ nautical miles, and then joined the main river flowing down the dry bed of the English Channel. Since the retreat of the most recent glaciation south-eastern Great Britain, like the Netherlands, has been steadily slowly sinking through historic time due to forebulge sinking.

A new theory - that the Solent was originally a lagoon - was reported in the Southern Daily Echo by Garry Momber from the Hampshire and Wight Trust for Maritime Archaeology. [8] [9] [10]

The theory of the Solent river posits that the Isle of Wight was formerly contiguous with the Isle of Purbeck in Dorset, and that the Needles are the last remnant of this ancient connection. 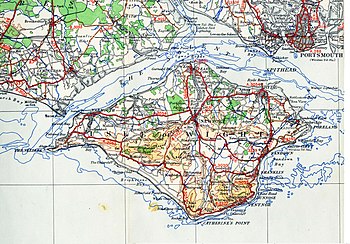 A map of the Solent and surrounding areas from 1945

Remains of human habitation have been found from the prehistoric, Roman and Anglo-Saxon eras, showing that mankind retreated towards progressively higher ground since the prehistoric ages. Offshore from Bouldnor, Isle of Wight, divers have found at 6.0 fathoms the submerged remains of a wooden building that was built there on land around 6000 BC when the sea level was lower and the land was higher.[11][12][13][14][15][16][17][18][19]

There is an early Norman period report that much land on the south of Hayling Island was lost to sea flood. South of Hayling Island in the Solent is a deposit of stones, which scuba divers found to be the remains of a stone building, probably a church. There is an old report that this church was formerly in the middle of Hayling Island. If similar amounts of land have been lost on other parts of the Solent shore, the Solent was likely much narrower in Roman times, and it is possible to believe Diodorus Siculus's report that in his time men could wade to the Isle of Wight at low tide. Similarly, it is known that Selsey was once a port town, with Selsey Abbey and a bishop's seat recorded here until 1075, when the Diocese of Sussex was moved inland to Chichester.

During the late Middle Ages, Henry VIII built an extensive set of coastal defences at each end of the Solent, part of his Device Forts, effectively controlling access to east and west. In 1982, Henry VIII's flagship, the Mary Rose, was lifted off the seabed of the Solent by a salvage project, 437 years after it sank. More forts were built on land and at sea in the 19th century. These were generally known as Palmerston Forts.

In 1685 King James II narrowly escaped shipwreck while sailing in the Solent. Musician Henry Purcell wrote "They that go down to the sea in ships" to be sung by extraordinary voice of John Gostling to commemorate it.

The Solent was one of two sites for the sailing]] events at the 1908 Summer Olympics.[20]

A bank in the centre of the Solent, Bramble Bank, is exposed at low water at spring tide. This, combined with the unique tidal patterns in the area, makes navigation challenging. There is an annual cricket match on Bramble Bank during the lowest tide of the year, but games are often cut short by rising tide. 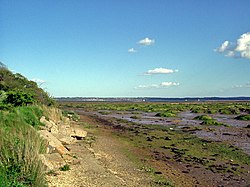 Ten thousand years ago a band of relatively resistant Chalk rock, part of the Southern England Chalk Formation ran from the Isle of Purbeck area of south Dorset to the eastern end of Isle of Wight, parallel to the South Downs. Inland behind the Chalk were less resistant sands, clays and gravels. Through these weak soils and rocks ran many rivers, from the Dorset Frome in the west and including the Stour, Beaulieu River, Test, Itchen and Hamble, which created a large estuary flowing west to east and into the English Channel at the eastern end of the present Solent. This great estuary ran through a wooded valley and is now referred to as the Solent River.

When glaciers covering the north of Britain melted at the end of the last ice age, two things happened to create the Solent. Firstly, a great amount of flood water ran into the Solent River and its tributaries, carving the estuary deeper. Secondly, post-glacial rebound after the removal of the weight of ice over the north of Great Britain caused the island to tilt about an east-west axis, because isostatic rebound in the north and Scandinavia is pulling mantle rock out from under the south and the Netherlands: this is forebulge sinking. Over thousands of years, the land sank in the south (a process still continuing) to submerge many valleys creating today's characteristic rias, such as Southampton Water and Poole Harbour, as well as submerging the Solent. The estuary of the Solent River was gradually flooded, and eventually the Isle of Wight became separated from the mainland as the chalk ridge between The Needles on the island and Old Harry Rocks on the mainland was eroded. This is thought to have happened about 7,000 years ago.

The process of coastal change is still continuing, with the soft cliffs on some parts of the Solent, such as Fort Victoria, constantly eroding, whilst other parts, such as Ryde Sands, accreting.

The Solent is a comparatively shallow stretch of tidal water. It has an unusual double tide[21] that is both favourable to maritime activities as well as a hazard with its strong tidal movements and quickly changing sea states.

Coupled with the above, the Solent is renowned for its large volume of vessel usage, thus resulting in one of the highest density of declared lifeboat stations in the world. This includes six RNLI stations and five independently run stations (for example Hamble Lifeboat and Gosport and Fareham Inshore Rescue Service).