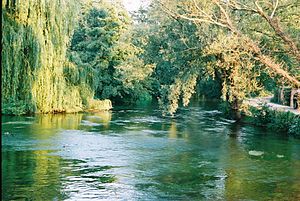 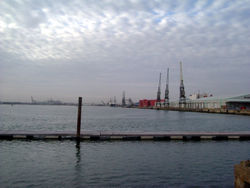 The tidal River Test in Southampton 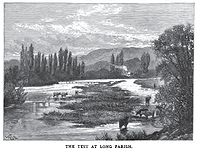 The River Test is one of the main rivers of Hampshire. It has a total length of 40 miles and it flows through downland from its source near Ashe to the sea at the head of Southampton Water. In its upper reaches it is a chalk stream, and anglers after trout come here for fly fishing.

The river is managed by the Environment Agency. The Port of Southampton is the navigation authority for the tidal section, below Redbridge.

The river rises near the village of Ashe, six miles to the west of Basingstoke (at SU532498), and flows west through the villages of Overton, Laverstoke, and the town of Whitchurch, before joining with the Bourne Rivulet at Testbourne and turning in a more southerly direction. It then proceeds through the villages of Longparish and Middleton to Wherwell and Chilbolton, where the Rivers Dever and Anton join.

From Chilbolton the river goes through the villages of Leckford, Longstock, Stockbridge and Houghton to Mottisfont and Kimbridge, where the River Dun joins the flow. From here the village of Timsbury is passed, then through the grounds of Roke Manor before reaching the town of Romsey. On the western edge of Romsey, Sadler's Mill, an 18th Century watermill, sits astride the River Test.

South of Romsey, the river passes a grand country house, Broadlands, and then Nursling that was once the site of a Roman bridge. Finally the river is joined by the River Blackwater and soon becomes tidal.

The tidal river widens out into a considerable estuary that is lined on its northern bank by the container terminals and quays of the Port of Southampton. The Test estuary then meets that of the River Itchen and the two continue to the sea as Southampton Water.

Between Chilbolton and Redbridge, the river was once paralleled by the Andover Canal, which was itself converted to a railway in 1865, and then in turn abandoned. Most traces of the canal have disappeared, although the remains of a stretch can still be seen between Timsbury and Romsey.[1]

The river plays a significant part in Richard Adams's novel Watership Down.

After Bigwig leads the break-out from Efrafa, the Watership rabbits are pursued by an Efrafan force led by their Chief, General Woundwort. Hazel carries out a plan devised by Blackberry which leads to their successful escape down the Test on a punt. In the text we are told that this plan would not have been possible on most rivers, but the Test's smooth-flowing, weed-free nature makes it an exception. The fact of the escapers' being rabbits does not seem to have impeded the plot. Shortly afterwards, the punt becomes lodged on a low bridge, and the surviving rabbits are forced to swim under it to get out.

The following are the named tributaries of the River Test, listed in order upstream from Southampton Water: