The place name Selsey-Bill has become synonymous with the town of Selsey, for example Edward Heron-Allen wrote about The Parish Church of St Peter on Selsey Bill Sussex even though the church is situated in Selsey High Street.[1]

In the 18th century members of the Hawkhurst Gang, a notorious smuggling gang were captured and tried for the brutal murder of a supposed informant and a customs official, Chater and Galley.[2] Seven were condemned to death at the assizes held at Chichester in 1749. After they had been executed at the Broyle, Chichester, two of them were subsequently hung in chains at Selsey Bill, a Yeakel and Gardner map has a Gibbet Field marked on it where it is believed the smugglers hung.[2]

Since 1861 there has been a lifeboat station to the east of Selsey Bill, and there are a system of beacons that warn sailors of the treacherous Owers and Mixon rocks that are south of Selsey Bill. 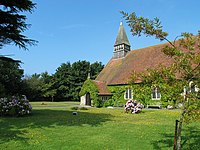 The parish church is St Peter's.

Selsey Bill and the sea 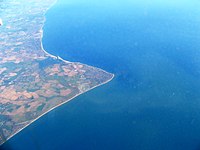 Selsey Bill from the air

In the 19th and early 20th century the local fishermen jointly owned a longboat, operated by 22 oarsmen. If any vessel were stranded off the Bill then after any rescue work had been completed the pilot of the longboat would negotiate with the skipper, of the damaged vessel, a price to assist them to safe harbour.