Newport is a market town in Shropshire on the Staffordshire border, over which its northernmost development trespasses. Newport is some six miles north of Telford though a separate town, and some 12 miles west of Stafford. The 2001 census recorded 10,814 people living in the town's parish, and a 2008 estimate puts it between 12,444, with another 5,000 dwelling round about in the outlying villages and farming districts.

Newport has been a "Britain in Bloom" finalist and has been awarded the silver gilt award from the Heart of England regional, making Newport the first town in the country to win six gold awards in a row,[1] the 2010 competition brought the towns seventh consecutive gold medal, receiving more points of any town in the United Kingdom.[2]

The Normans planned a New Town called Novo Burgo between the older settlements of Edgmond and Plesc which is located near to where the Old Quarry and Mere Park garden centre. The first market charter was granted by Henry I and over time the name Newborough changed to Newport.

The site was chosen partly because of its location near the Via Devana the Roman road route between Colchester to Chester and partly due to the rich river fisheries (which are mentioned in the Domesday Survey).

Newport lies on the eastern border of the Welsh Marches and west of the Aqualate Mere, the largest natural lake in the Midlands [3] a mile long and 3 miles wide, found in the grounds of the deer park which houses Aqualate Hall.

Newport stands on a sandstone ridge. The area around it at the end of the last Ice Age was part of Lake Lapworth, formed from melting glaciers and which covered a vast area of North Shropshire. Early man fished here and two log boats were uncovered a mile from Newport. One has been preserved and is now held in Edgmond.

The villages of Church Aston, Chetwynd and Longford are adjoined to the south of Newport. The village of Edgmond is just to the west, separated by Cheney Hill, Chetwynd Park and the Shrewsbury and Newport Canal.

Like many rural market towns, Newport was influenced by industry; it served the needs of the mining area to the east of Shropshire and was also affected by mass-produced industrial goods that replaced traditional crafts.

Facilities and places of interest

The main street in Newport follows the Norman design, giving it a distinctive, long, wide High Street, split into three parts; Upper Bar, Lower Bar and St Mary's Street. At the centre of the High Street are the Puleston Cross and the 19th century Newport Market Hall, completed in March 1860 with an Italianate frontage, replacing an earlier building that was demolished due to fire.

Burgage plots ran along either side and the church rising up in the middle, with the High Street with St Mary's Street splitting off and re-joining the high street around the island the St Nicolas Church and Butter Cross, an ancient market cross. 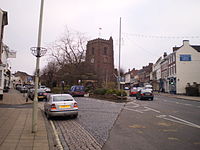 After the fire of Newport in 1666 the old Norman buildings were replaced with grander Georgian architecture, which hid the work yards behind; the shops are still there but the work yards have now been developed into housing or the Boughy gardens tennis courts, next to the literary institute.

Despite being close to larger retail centres such as Telford, Shrewsbury and Stafford, Newport has retained a large number of shops that line the High Street, Stafford Street and St Mary's Street. St Mary's Street keeps its charm by still using cobblestones and the majority of shops being small boutiques. St Mary's is also the site of various markets and fairs such as the Olde Time Market, with over 50 stalls, and various farmers markets; these tie in with Newport's indoor market.

The Puleston Cross is a butter cross standing near to the Church of St Nicholas. This is an early 14th century cross denoting a market place and named after Sir John Puleston who lost his life during the reign of King Edward I on campaign in Wales.

The town sits near the Aqualate Mere, which is the largest natural lake in the Midlands. 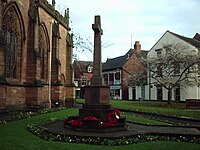 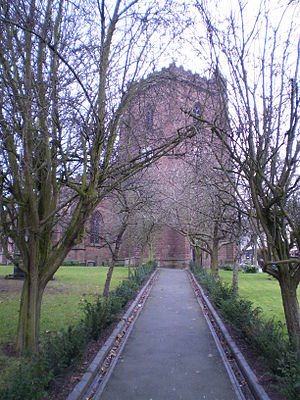 Newport lies in the Diocese of Lichfield. When the Normans planned their new town, the church was given a dominant position in the design of the town, with the centre of the town being dominated by St Nicholas Church, originally built in the reign of Henry I and restored in 1886 and 1890.

In Anglo-Saxon times there where two settlements in the location of the modern day town, the first Eastun, has been identified as Church Aston and the second, Plesc, lies south of the town near to location of the Mere-park Garden centre. In 963, Plesc was described as having a High Street, a stone quarry and a religious community. The name Plesc means fortified place or one with a palisade, thus suggesting that it was of some importance in the local area, few signs of the Saxon settlement exist today, apart from the Quarry which has now been built around.

Newport was omitted from the Domesday Book, but this is not uncommon, other towns omitted include London, Tamworth, Oswestry and Ludlow, all boroughs since Anglo-Saxon times.

At the time of the Norman Conquest, the land where Newport sits then formed part of the manor of Edgmond, which William I granted as a gift along with the county of Salop to Roger, Earl of Shrewsbury. Henry I founded the borough, first called Newborough, after the manor had come into his hands from Robert of Bellême.

The Normans planned the new town around the older one during the reign of Henry I. The wide main street was designed for its market and the narrow burgage plots running at right angles to it are typical of Norman architecture and planning, though today only Guildhall and Smallwood Lodge are clear signs of Norman buildings, due to the 1665 fire which detroyed most of the High Street.

Mediæval Newport flourished with trade in leather, wool and fish. Novoportans possessed the right to provide fish for the Royal table. The many half-timbered buildings surviving from the Late Mediæval and Tudor periods confirm Newport's success.

The town is mentioned once by Leland in a list of castles. Though there are now no visible remains of the castle. The most probable location for this would be the traditional site of a manor house at Upper Bar where there is a fragment of a square, broad moat, or on the higher ground along the Forton road where the Castle House school stands, As regards the moat, nearly square, forming by measurement an area of 60 sq yds., two sides have been filled with rubbish. Nothing is known about the occupants of the moated site. It could have pre dated the town or, perhaps more likely, been the manor house of the Audleys, who were granted the manor in 1227. In 1421 the manor house was ruinous.

One of the main reasons for Newports early wealth was the surrounding fisheries and the chief service of the burgesses being that of taking fish to the Royal court wherever it might be. This custom was continued after Henry III had granted the borough with the manor of Edgmond, to Henry de Audley, but in the middle of the 13th century James, son of Henry de Audley, granted that the burgesses need not take the fish anywhere except within the county of Salop. 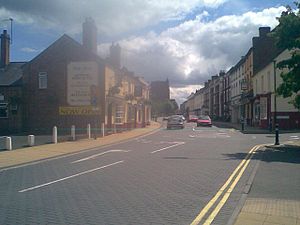 The burgesses received certain privileges from Henry I, evidenced by an undated charter of Henry II which granted them all the liberties, rights and customs which they had in the time of Henry I. Including a gild merchant, which is mentioned in the Quo Warranto Rolls as one of the privileges claimed by the burgesses. Confirmation charters were granted by Edward I in 1287 and Edward II in 1311, while the town was incorporated in 1551 by Edward VI, whose charter was confirmed by James I in 1604. The governing body consisted of a Lord High Steward, deputy steward, two water-bailiffs and 28 burgesses, but the corporation was abolished by the Municipal Corporation Act of 1883, and a Local Board was formed.

In 1665 many buildings were damaged in the Great fire of Newport and only a few of the mediæval structures remain, but there remain many fine Regency and Georgian frontages, which were built on the site of the former Norman plots, this meaning that the main streets of Newport, wider and less cluttered as the other towns of its age.

By the 19th century Newport was surrounded by large estates that came right to the back door of the town, determining size and development. The vivary and open fields at Norbroom had gone making the town dependent on its rural hinterland. The few fields that remained were for hay or cattle, forming a small green belt, these estates exerted a powerful influenced on the town until at least the First World War.

From the 1960s very little in the way of redevelopment happened in the town, as attention was focussed on towns such as Wellington and Oakengates, which now make up the new town of Telford. Thus Newport survived as a town. In 2007 the local council ensured a major redevelopment of the canal and surrounding area, the lower bar of the High Street area, planned housing, bars and restaurants set to line the canal. There are also plans to build two new hotels in the town and much else besides.

Newport has a wide range of different activities throughout the year and is fast becoming a cultural centre in the area. It also offers the beauty of the town and surrounding Shropshire countryside.

The Guildhall is a mediæval timber-framed building that is the home to Newport Town Council and is used for official purposes as well as smaller events.

Newport Market Hall built in 1860 and is considered one of the town's grandest buildings and is the location of the town's dance hall, though not used in recent times.

Newport has a lively night life for a town of its size, mainly due to the students from the Harper Adams University College along with other students from Newport. The night-life is at its most lively during the weekends, as well as Monday and Wednesday nights during 'term time'.

A wide range of small pubs and wine bars is spread up and down the High Street.

The town hosts many events throughout the year, but six main events bring people to Newport, which are Newport Show is hosted yearly in Chetwynd Park and is situated in the show-ground between Edgmond and Newport. The Newport show has become one of the main shows in the county. The show ground also hosts the Shropshire Game Fair and British Falconry and raptor fair.

In the centre of town itself the main events are the Newport carnival, which has been staged in Newport for over 150 years and the Newport old time market which happen yearly usually on either side of Newport show in July, towards the end of the summer the newest event is the Newport Music festival which is hosted by various venues in the town.

By far the biggest event in the town is the biennial Newport Nocturne Bike Race, which brings the biggest crowds to Newport and is well covered by national press and media outlets