The Severn Valley Railway is a heritage railway in Shropshire, Staffordshire and Worcestershire, operating on a sixteen-mile track which runs along the Severn Valley from Bridgnorth in Shropshire to Kidderminster in Worcestershire, following the course of the River Severn for much of its route. Train services are hauled predominantly by steam locomotives; however diesel traction is also sometimes used on designated days and during periods of high fire risk.

The railway is one of the most popular heritage railways in the country as well as being the sixth-longest standard gauge heritage line in the United Kingdom. It hosts numerous special events throughout the year, including both steam and diesel galas.

The original Severn Valley line was built between 1858 and 1862, and linked Hartlebury, near Droitwich, with Shrewsbury, a distance of forty miles. Important stations on the line were Stourport-on-Severn and Bewdley within Worcestershire; Arley in Staffordshire; and Highley, Hampton Loade, Bridgnorth, Coalport, Ironbridge and Broseley, Buildwas, Cressage and Berrington in Shropshire.[1] The original Severn Valley Railway was absorbed into the Great Western Railway in the 1870s, and in 1878 a link line was constructed from Bewdley to Kidderminster. This meant that trains could run direct from the Black Country to areas of Shropshire.

Most Kidderminster to Bewdley trains continued through the Wyre Forest line (dismantled in the 1960s and now a popular walking route) to Tenbury Wells or Woofferton. At Buildwas Junction (now the site of Ironbridge Power Station near what is now Telford) Severn Valley trains connected with services from Wellington to Much Wenlock and Craven Arms.

The Severn Valley line was never financially successful. Freight traffic, mostly agricultural, and coal traffic from the collieries of Alveley and Highley were the principal sources of revenue. The line was strategically useful in the Second World War as a by-pass around the Black Country conurbation.

After nationalisation in 1948, passenger traffic started to dwindle. The line was closed to through passenger and freight services in 1963[2] and the track north of Bridgnorth was dismantled. Whilst it is generally believed that the line was closed under the "Beeching Axe" of the 1960s, the Severn Valley Line was, in fact, already scheduled for closure prior to the release of Beeching's 1962 report. After 1963, coal traffic survived south of Alveley until 1969, while a sparse passenger service continued to link Bewdley with Kidderminster and Hartlebury, until this too ceased in January 1970.

For much of its working life it was operated by the Great Western Railway and subsequently the Western Region of British Railways. Today the Severn Valley Railway operates as a heritage railway. Services began in 1970 from Bridgnorth to Hampton Loade, extending to Bewdley in 1974 and Kidderminster in 1984.

2010 marked the Severn Valley railway's 40th anniversary since opening in 1970 and the 175th anniversary of the formation of the Great Western Railway. Special events were staged during the year to commemorate these events. 2015 marks the 50th anniversary since the birth of the Severn Valley Railway on Tue 6 July 1965 and a number of events are planned for 2015 and a special lineup is being planned for the September "Autumn Steam Gala" which will be taking place in September.

SVR trains usually operate over the whole line length calling at most stations. The "halts" (Northwood Halt and Country Park Halt) are request stops. Passengers may use these halts during daylight hours only. Trains include the Severn Valley Limited and the Severn Valley Venturer which are the principal dining car trains (normally on Sundays).

Many special gala days are held, often with visiting engines and rolling stock from other heritage lines; these and other attractions have seen visitor numbers exceed 250,000 per year.

A diesel multiple unit is used to run a Scenic Evening Land Cruise fish-and-chip special train run on Saturday evenings from May to August, leaving Kidderminster at around 7pm and returning at 10pm after one hour in Bridgnorth.[3] The Severn Valley Venturer is a dining car that runs on the railway.

The SVR's rail connection to the National Rail network at Kidderminster permits various track maintenance, weed killing, track measurement and occasional through charter trains to operate from various parts of the country to Bridgnorth. An example of these visitors was that of the VSOE Northern Belle in 2006. Two direct trains to London Marylebone from Bridgnorth operated by Chiltern Railways ran in 2009, one on 15 August and one on 28 November. Some trackwork revisions have been completed at Kidderminster to improve ingress of incoming excursions.

The railway operated two revenue-earning freight trains in May 2007 which carried 20-foot-long pipes from Kidderminster to the Severn Trent water handling plant at Trimpley. Carriage by road of such long pipes would have been difficult because of the narrow roads in the immediate area of Trimpley.

During violent thunderstorms on the evening of 19 June 2007 the railway suffered major damage, much more extensive than any in its history.[4][5] The line was damaged between Bridgnorth Outer Home signal and Northwood Halt, where the line suffered from numerous landslides with many sections of the line suspended in mid-air.(BBC photo) Many cuttings were filled with debris. At Highley the Up Starter signal and the embankment that it used to stand on were washed away. At Hampton, the access road to the railway station – and indeed the only road to the village – was also washed away.[6] (BBC photo).

An emergency fundraising campaign raised the millions required to set the railway to rights, though even then the repair work was disrupted by further storms.

The Bridgnorth to Hampton Loade section eventually re-opened on 9 February 2008 for the school half-term. Although other drainage work enhancements remained to be completed, the line between Kidderminster and Bridgnorth reopened fully to the public on Good Friday, 21 March 2008. The work increased to 144 the number of culverts under the line, where previously there were 44 before the 2007 floods.[7] 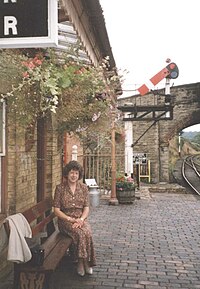 With the exception of the two request halts (Country Park and Northwood), all intermediate stations have the ability to pass trains on the single line. However, Highley's passing loop lacks a platform and Facing Point Locks on points to attached sidings, a legal requirement for passenger-carrying line, meaning trains carrying fare-paying passengers may not use this loop. However, it is frequently used for works trains, demonstration goods trains and empty stock workings. Despite this, the Severn Valley Railway offers, possibly, the most intensive service on any single line heritage railway. A short section of multiple track exists between Bewdley South and Bewdley North signal boxes.

Kidderminster Town station is not an original station. It was created by the SVR, based upon the original GWR station at Ross-on-Wye (1892).[8] Various projects have been carried out by volunteers and contractors to add to the general GWR ambience. Major projects include the porte cochère to the front of the station, the ornamental crestings on the two towers and the canopy over the concourse which was completed in 2006, along with the final, east, wing of the station.

There are plans to provide new catering, shop and toilet facilities at Bridgnorth.

For many years, the SVR official website has confirmed that 'the railway land north of Bridgnorth has been long since sold, and there is now no possibility of Severn Valley trains reaching Ironbridge and Shrewsbury ever again'[9] The 559-yard-long Bridgnorth Tunnel is still in existence, as is the old trackbed between both Coalport and Bridgnorth.

The railway can call on a large fleet to operate its services.[10] Only a diminishing core of vehicles actually belong to the railway company, the remainder being owned by associated groups, such as the Great Western (Severn Valley Railway) Association,[11][12] and individuals. The SVR is also the base of the DMU (diesel multiple unit) West Midland Group. Locomotives and stock from the railway do not now often operate excursions on the National Rail network, but they have in the past been seen from Mallaig to Plymouth.

The main locomotive works are located at Bridgnorth.[13][14] It is not normally open to the public but conducted tours and open days are arranged from time to time. Major features of the locomotive works include the boiler shop equipped with overhead crane, Noble and Lunn wheel lathe, ex-LT lifting jacks and a Wheeldrop recovered from Leicestershire, installed in 2010. Works to enclose the southern end of Bridgnorth locomotive shed with roller shutter doors, improve natural illumination and waterproof the building more effectively were completed in early 2009. This forms the first of a number of phases to improve the Bridgnorth site both for staff and for visitors.

Although carriage repair and restoration is carried out at a number of locations on the railway, the main carriage works is located in the former goods shed at Kidderminster. This building, lying adjacent to the main national railway line, is known as the North Star Carriage Works thus perpetuating a typical GWR name. As well as having a machine shop and fabrication equipment to carry out a full range of body and bogie repairs the carriage works boasts equipment recovered from former BR works to calibrate and adjust dynamo voltage regulators and to thoroughly overhaul and test vacuum brake equipment, a facility that is almost extinct elsewhere. In common with the locomotive works it is not normally open to the public due to health and safety legislation. 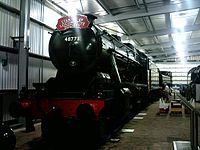 The Engine House, built on land adjacent to the station at Highley provides covered accommodation for locomotives currently out of service, displays of other rolling stock, and an education/interpretation centre. Although it was due to be open mid/late 2007, the planned opening dates were affected by the flood damage at Highley station with rail access to the site finally being installed in March 2008. The first exhibits arrived by rail on 14 and 16 March 2008, allowing the museum to open in conjunction with the full line reopening. In late 2008 access was not possible by rail as passenger trains did not stop at Highley station whilst footings and parts of a new footbridge were built. Highley station reopened in 2009 and the new footbridge was completed during October 2009.

Although the Engine House was due to be formally opened by Prince Richard, Duke of Gloucester on 28 April 2009 he was unable to attend due to illness; Algernon Heber-Percy, Lord Lieutenant of Shropshire deputised in the Prince's absence. It was formally opened by the Duke during a rescheduled visit on 21 October 2009.

Perhaps interestingly, the land on which the Engine House stands was previously owned by the SVR prior to sale and eventual re-purchase.

The railway in television and film