Gordon Castle is a castle in the parish of Bellie, on the borders of Banffshire and Morayshire, near Fochabers. Historically known as the Bog-of-Gight, it was the principal seat of the Dukes of Gordon. Following 18th-century redevelopment, it became one of the largest country houses ever built in Scotland, although much has since been demolished. Whereas the majority of the castle buildings lie in Banffshire, much of the estate, including the eight-acre walled garden and lake lie in Morayshire. 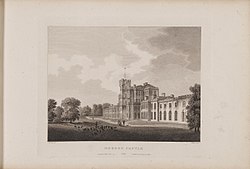 The original castle was built by George Gordon, 2nd Earl of Huntly in the 1470s and enlarged by his grandson.

The architect John Adam was commissioned with the French architect Abraham Roumieu to redesign the castle in 1764 but this did not come to fruition. Eventually the commission fell to the lesser-known Edinburgh architect, John Baxter, who rebuilt it in 1769 for Alexander Gordon, 4th Duke of Gordon. The central four-storey block incorporated a six-storey mediæval tower called the Bog-of-Gight, and was flanked by a pair of two-storey wings. The main facade was 568 feet long. Most of the castle has been demolished, but the Bog-of-Gight and one of the wings—now a detached medium-sized country house in its own right—survive.

Today the castle is used as a hotel, entertainment and wedding venue.

This Banffshire article is a stub: help to improve Wikishire by building it up.